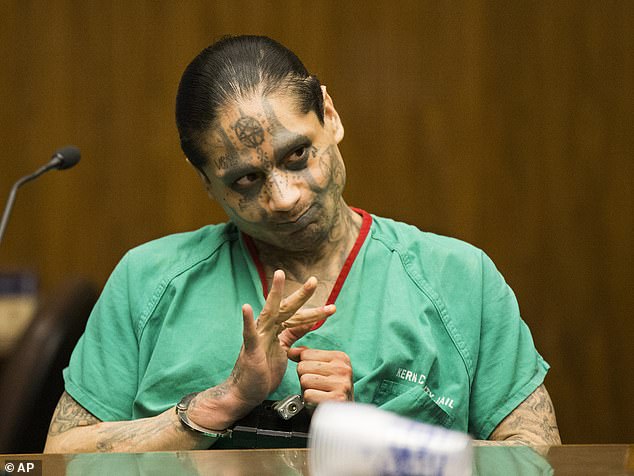 California prison guards “didn’t notice” that a self-described Satanist decapitated and dissected the body of his cellmate, a state investigation found.

Why the officers at Corcoran State Prison didn’t discover the grisly scene until the following morning is not detailed in the reports, the Los Angeles Times reported. A lawsuit filed by the dead inmate’s family claims the cell bars were covered with a sheet and accuses the guards of not checking the cell.

The mutilated corpse of Luis Romero, 44, was discovered the morning of March 9, 2019, in the cell he shared with Jaime Osuna, 31. Below

Osuna was serving a life sentence for torturing and killing a woman at a motel in 2011 and had a history of attacking fellow inmates. He had never had a cellmate before.

He allegedly used a homemade knife to cut out one of Romero’s eyes, chop off a finger, remove part of his ribs and slice out part of a lung. He ultimately cut off his head. He also posed the body, slicing Romero’s face open on either side of his mouth to resemble an extended smile, according to an autopsy.

When the guards finally found the dreadful scene, Osuna was wearing a necklace made of Romero’s body parts.

His new cellmate, Osuna, was serving a life sentence for the killing and torture of Yvette Pena, 37, at a Bakersfield motel in 2011.

With face tattoos and flair for Charles Manson-like satanic antics, he became a dark figure during the 2017 trial, mocking the victim’s family and bragging to a television news reporter of his love of torturing people.

The lawsuit says he once went into another cell to stab and slash an inmate, resulting in 67 stitches.

A state investigation found that the guards reported both men alive the night before. The state probe doesn’t say why the cell was not checked at any point during the night. It said the two officers falsely reported seeing Romero alive and that two other offices did not report that their colleagues had failed to properly conduct inmate counts the night of the horrific scene.

The report also criticizes the prison department’s internal affairs investigation, noting that some officers lied and key witnesses were not interviewed. And the question of whether the two killers should have been put together was never probed.

A judge has ruled that Osuna is not competent to stand trial for Romero’s death.