The suspected gunmen in the University of Virginia shooting told father he was being picked on before shooting. Henrico Police/Twitter

The University of Virginia student accused of killing three players on the college’s football team reportedly told his father some people had been “picking on him” ahead of Sunday night’s deadly shooting.

“He had some problems the last time I talked to him. He said some people was picking on him or whatever, he didn’t know how to handle it, and I just told him don’t pay it any mind and just go to school,” Jones Sr. recalled.

“He was really paranoid when I talk to him about something, but he wouldn’t tell me everything. He was a very sensitive young man.” The father and son spoke about a month before Jones Jr. allegedly opened fire on a bus full of football players who were returning to the Charlottesville campus from a field trip.

Jones Jr. was arrested in Henrico Monday morning following a 12 hour manhunt and slapped with three charges of second-degree murder.

The distraught father said he last saw his son when he came to his house to do laundry and he seemed like he was doing well. 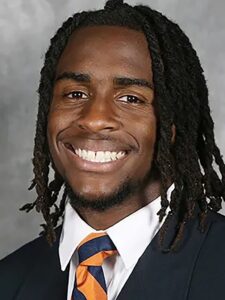 “When we finally had a chance to talk, he said there were some people there who were giving him a hard time, but he still was upbeat, and he was positive,” Jones Sr. said. “I don’t know what happened between then and now to cause this to happen.”

The accused gunman’s mother told NBC12 that when she spoke to her son Sunday, nothing appeared out of the ordinary and he seemed excited to celebrate his 23rd birthday on Thursday.

He added that he wished his son had called him about whatever he was going through.

“Why did it have to get this far?” Jones Sr. questioned. “He could’ve called me… If he had called me Saturday, I think maybe I could have talked him out of some things, maybe, hopefully.”

He described his son, now an accused murderer, as someone who was a friend to everyone and excelled at everything.

“He was everyone’s friend, everybody loved Chris, and he had a movie star smile he would flash,” he told the news station. The three students killed in the shooting have been identified as Devin Chandler of Virginia Beach, Lavel “Tyler” Davis of Dorchester, South Carolina, and D’Sean Perry of Miami, Florida. Two more students were injured.

Jones Sr. said he feels awful for the victims and their families.

Jones Jr. is being held in the Henrico jail.