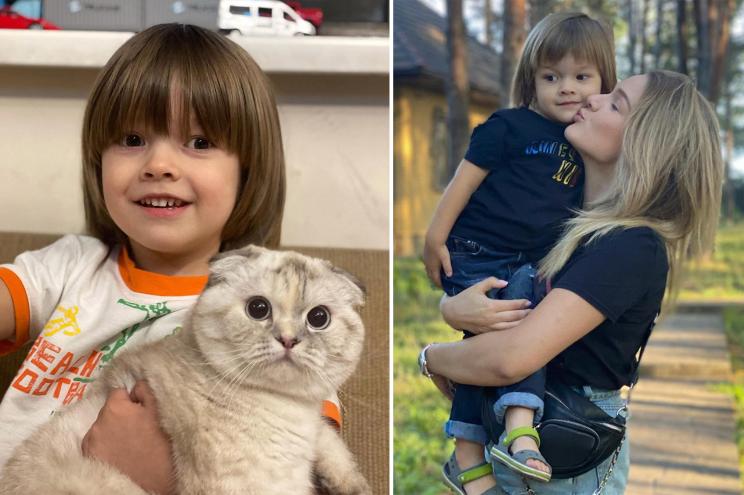 Sasha Zdanovych, 4, was killed along with his grandmother as they attempted to flee Russian attacks. Anna Yakhno/ EAST2WEST NEWS

The last photo taken of Sasha Zdanovych showed him blowing out the candles on his birthday cake.

A week later, the 4-year-old was dead, another young victim of the Russian invasion of Ukraine.

The boy disappeared on a boat that capsized as it desperately tried to escape the slaughter via a 6-mile wide reservoir on the Dnieper River, The Sun reported.

“There was no other way to escape then — the Russian military blocked all roads,” said Ukraine’s President Volodymyr Zelensky, who told world leaders Sasha’s story during his virtual global tour on April 7. “They shot people on the roads. So the adults tried to escape from them by the river.”

His heartbroken mother, Anna Yakhno, spent 26 days not knowing what happened to her son before his body was found.

“The world must never forget Sasha’s name or the man responsible,” Yakhno, 25, told The Sun.

Sasha was staying with his grandmother Zoya, 59, in a town 30 miles north of the Ukrainian capital Kyiv when Russian troops invaded on Feb. 24. The town was cut off, and Zoya and Sasha huddled with neighbors to avoid being alone with no heat, power, or running water.

“He was afraid,” Yakhno said. “He was waiting for us and he was asking ‘When it will finish?’”

But he was also excited about his fourth birthday, on March 4.

Sasha’s mother said that Putin and Russia “will pay” for his death and “for all Ukrainians.”Anna Yakhno/ EAST2WEST NEWS

Five days later, Sasha spoke to Yakhno for the final time. “He said ‘Mummy, don’t worry. I will drive to you when they stop shooting,’” she recalled.

Zoya and Sasha traveled to a jetty with neighbors, as bombs went off around them. Yakhno knew it was a last resort, because Zoya could not swim and had always been scared of water.

When she didn’t hear from them by the next day, she was terrified. She was in another city and called Sasha’s father, who raced to the reservoir. it was there that he learned that two boats had left, but only one made it to the other side.

Sasha Zdanovych disappeared on a boat from Ukraine that capsized as it desperately tried to escape Russia’s slaughter.Anna Yakhno/ EAST2WEST NEWS

The boat was found up washed up on shore about three miles downstream a few days later, with the body of an adult who had been visiting Zoya’s neighbors underneath it and Zoya’s body nearby.

Days went by, and the bodies of other passengers were found but not Sasha’s, leaving his mother to cling to hope that someone had found the boy and taken him in.

“Day after day I was waiting,” Yakhno said. “I had so many messages. All I did, from morning to night, was read messages. A lot of messages from different people.”

Sasha’s mother wants the world “to remember who did this to him. It was Russia. It was Putin.”Anna Yakhno/ EAST2WEST NEWS

The grieving mom said her son was “the kindest child in the world,” and “loved everybody.”

“If you had the chance to play with him, or to communicate with him, and if he felt that you are kind he will say, ‘I love you’,” she said. “He said, ‘I love you’ to everyone who he likes.”

She said the world must never forget the terror and pain Russia unleashed on her country. and vowed to see Russian President Vladimir Putin stand trial for war crimes.

“I want the world to remember Sasha, and remember who did this to him. It was Russia. It was Putin. I don’t know how to shoot a gun, but I can tell people the truth about this terrible war.”

“He will sit in The Hague and he will see me there,” she said.

“His army came here and did this. They too are responsible,” Yakhno added. “You will pay for it. They will pay for all Ukrainians.”