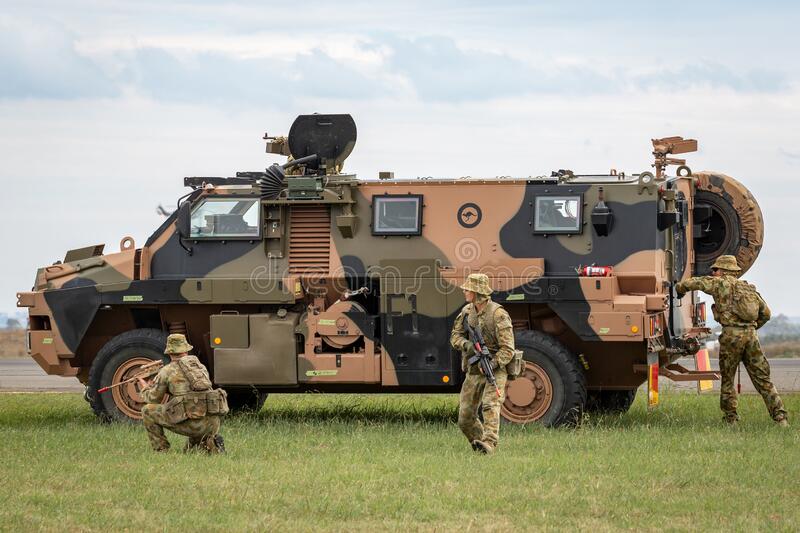 Ukraine’s President Volodymyr Zelensky has asked Australia for its armoured vehicles, the Bushmasters, and more weapons in a direct plea to Federal Parliament that drew on the two nations’ shared history over the downing of the MH17 almost a decade ago.

He also issued a veiled warning during an address to a joint sitting of Parliament that if Russia is not stopped and punished for its invasion, China could take heart and seek to launch its own incursions on its neighbours.

Australia has promised another $25 million in military aid to Ukraine, including drones, tactical decoys and rations, and announced it will apply hefty tariffs to all imports from Russia and its supporter Belarus.

The government has already sent $91 million in military assistance and $65 million in humanitarian aid to the country since Russian troops invaded last month. It has also promised to send a shipload of coal for one of Ukraine’s power plants and joined international sanctions on Russian banks and oligarchs.

Mr Zelensky said he was grateful for Australia’s support but “this is only the beginning; we can and need to do more”.

He said Bushmasters “could help Ukraine substantially” and also asked for “other pieces of equipment that could strengthen our position in terms of armaments”.

“If you have an opportunity to share this with us, we would be very grateful. In Ukraine they will do much more for our common freedom, common security, than staying in parts on your land,” he said.

The Ukrainian, wearing his now-trademark khaki t-shirt and addressing Parliament via video link, warned that although his country was thousands of kilometres distant from Australia, there was no such thing as distance from the brutality Russia was wreaking.

“Whatever is happening in our region … has become a real threat to your country and your people as well,” he said.

Russia had brought back “the worst pages of the 20th century” and “the evil that humanity thought they had forgotten about a long time ago”, especially with its threats to use nuclear weapons.

“But the most terrible thing: if we don’t stop Russia now, if we don’t hold Russia accountable, some other countries of the world who are looking forward to similar war against their neighbours will decide that such things are possible for them as well,” he said.

Australia, the US and others have previously warned that China could be emboldened by Russia’s actions.

Mr Zelensky also referenced the tragedy, offering his condolences to all those who had lost relatives but also decrying the failure to hold Russia to account for its part.

Eight years on, justice hasn’t been achieved, he said, asking how many more tragedies Russia would create before that happened.

“If the world had punished Russia in 2014 for what it did, there wouldn’t be any of this terror of invasion in Ukraine in 2022.”

“We stand with you, Mr President, and we do not stand with the war criminal of Moscow,” he said.

The government won’t provide specific details about the new package or when it will be delivered, at the Ukrainians’ request. It has flagged further support could be sent as the conflict progresses.

Mr Morrison also announced an additional tariff of 35 per cent for all imports from Russia and Belarus, which will take effect from Anzac Day.

A ban on imports of oil and other energy products from those countries will also start on April 25.

Opposition Leader Anthony Albanese said Russian leader Vladimir Putin’s attempt to divide the west had in fact drawn countries closer together and strengthened a shared commitment to the values of freedom and democracy.

“As you stand up to this latest tyrant you are showing us what true courage is,” he told Mr Zelensky.