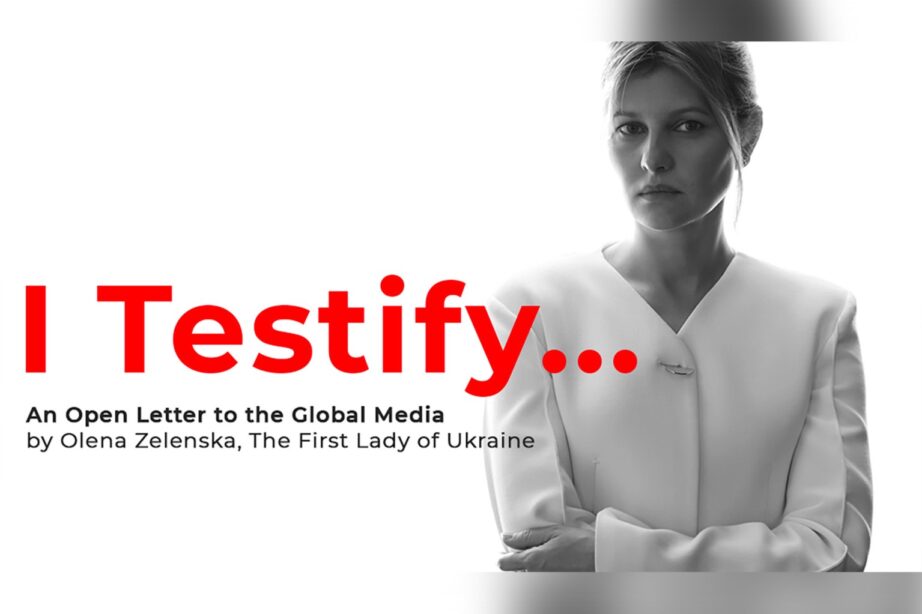 The first lady of Ukraine wrote in a passionate and searing “open letter to the media” Tuesday that Russia is guilty of the “mass murder of Ukrainian civilians” and warned Europe it could be next.

“What happened just over a week ago was impossible to believe. Our country was peaceful; our cities, towns, and villages were full of life,” wrote Olena Zelenska, the wife of Ukrainian President Volodymyr Zelensky.

But she added that the Ukrainian people will never give up.

“When Russia says that it is ‘not waging war against civilians,’ I call out the names of these murdered children first,” she said, listing the names of the war’s tragic youngest victims who died on the street in shellings, including some hit in the head by falling debris after a Russian bombing.

Echoing her husband, the first lady also called for Western countries to institute a “no-fly zone” over Ukraine.Stephan Lisowski/President of Ukraine

Zelenska echoed her husband’s call for a “no-fly zone” to be established over Ukraine.Photo by Presidency of Ukraine/Handout/Anadolu Agency via Getty Images

Ukranian children in a shelter after Russia invaded on Feb. 24.President of Ukraine

“Despite assurances from Kremlin-backed propaganda outlets, who call this a ‘special operation’ – it is, in fact, the mass murder of Ukrainian civilians,” the First Lady wrote.

“Our women and children now live in bomb shelters and basements. You have most likely all seen these images from Kyiv and Kharkiv metro stations, where people lie on the floors with their children and pets – trapped beneath. These are just consequences of war for some, for Ukrainians it now a horrific reality.

“In some cities families cannot get out of the bomb shelters for several days in a row because of the indiscriminate and deliberate bombing and shelling of civilian infrastructure.

Bodies on a street in Irpin, Ukraine, after shelling from the Russian army on March 6, 2022.Diego Herrera/Contacto via ZUMA Press

A map of the Russian invasion of Ukraine.

Babies born in a shelter after Russia invaded Ukraine.Stephan Lisowski/President of Ukraine

“The first newborn of the war, saw the concrete ceiling of the basement, their first breath was the acrid air of the underground, and they were greeted by a community trapped and terrorized. At this point, there are several dozen children who have never known peace in their lives,” the First Lady wrote.

Echoing her husband, she called for Western countries to institute a “no-fly zone” over Ukraine, which Putin has warned would be tantamount to declaring world war.

“We need those in power to close our sky!” she said. “Close the sky, and we will manage the war on the ground ourselves.

“Ukraine is stopping the force that may aggressively enter your cities tomorrow under the pretext of saving civilians,” she foreboded.

“I appeal to you, dear media: keep showing what is happening here and keep showing the truth. In the information war waged by the Russian Federation, every piece of evidence is crucial.”