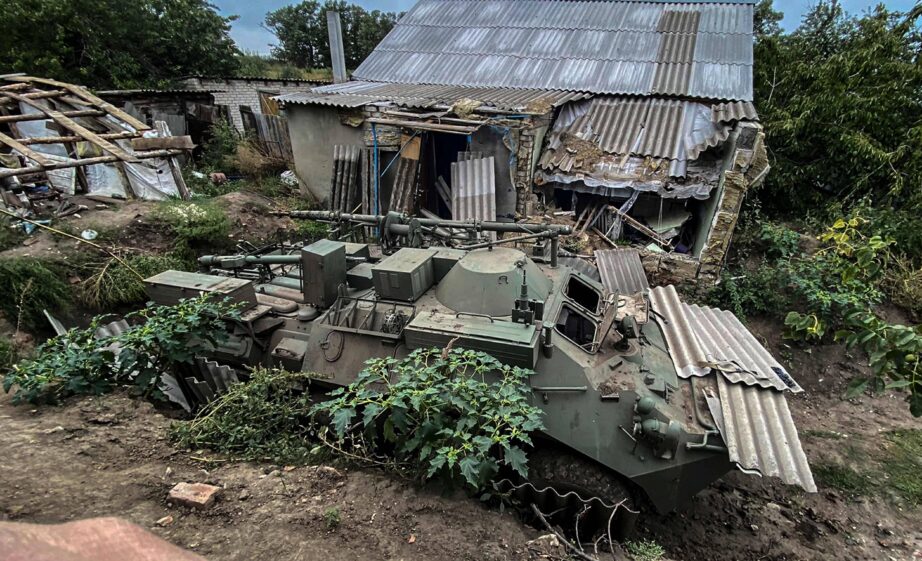 KYIV, Ukraine — Blue-and-yellow flags were raised in more liberated towns and villages in northeast Ukraine on Monday, as the stunning counteroffensive that pushed Russia into a messy retreat boosted optimism at home and abroad over a potential turning point in the war, and renewed international calls to send Ukraine more weapons in hopes of hastening Russia’s defeat.

The lightning push by Ukrainian forces, in which they recaptured in a matter of days nearly all of the Kharkiv region occupied since the early days of the war last winter, left Moscow reeling. Despite the setback, the Kremlin and its proxies insisted that the war would go on until President Vladimir Putin’s goals are achieved, and they blamed NATO and the United States for Ukraine’s refusal to surrender.

The Ukrainian military said Monday that in the previous 24 hours it had advanced into an additional 20 towns and villages that had been under Russian control — claims that could not be independently verified. On Sunday, Ukraine’s commander in chief, Gen. Valery Zaluzhny, said his forces had retaken more than more than 3,000 square kilometers — 1,100 square miles — in less than a week.

The U.S. government viewed the developments with cautious optimism. At the Pentagon, defense officials declined to speculate how far they think Ukrainian forces can push, but suggested the Russian military’s collapse in eastern Ukraine was symptomatic of its long-running struggles to organize, command, equip and sustain its forces. It was only a “matter of time” before those problems, coupled with Ukraine’s accumulation of advanced Western weapons, proved consequential in that area, said one of the officials, speaking on the condition of anonymity under ground rules set by the Defense Department.

Still, U.S. and Western officials assessed, the war will remain a tough fight for the Ukrainians, one that could stretch on for a long time to come. Negotiations to put an end to the war remain far off, officials surmised.

Russia still occupies large swaths of eastern and southern Ukraine, including cities like Mariupol and Kherson, Putin’s coveted “land bridge” to Crimea — which Russia annexed illegally in 2014 — and most of the Luhansk and Donetsk regions where Russia has recognized two self-declared separatist “republics.”

In their hasty retreat, presented by Russia’s Defense Ministry as a “regroup,” the Russians abandoned tanks, armored vehicles and ammunition that Ukraine plans to refashion and use on the battlefield. Military analysts said the equipment losses could be a significant blow to Russia — and that Ukraine will use its recent success to lobby for even more security assistance.

In recent weeks, Ukrainian officials had been worried about support from Western partners eroding ahead of U.S. elections that could shift control to the Republicans in Congress and what’s expected to be a difficult and expensive winter in Europe because of spiking energy prices tied to the war. But some Western allies have called to provide Ukraine with more powerful weapons.

In Moscow, the retreat exposed fissures among Kremlin loyalists.

Chechen leader Ramzan Kadyrov said he might have to speak with Putin himself because he didn’t trust that the Russian leader’s advisers are providing him with bad news. Pro-Russian military bloggers have sharply criticized the government for not mobilizing more soldiers for the fight — a move that Putin has sought to avoid because conscriptions could risk turning public support against the war.

On Monday, officials reiterated that the aims of the “special military operation” — the Kremlin term for the war — would be accomplished regardless of the setbacks, though the precise aims have never been fully clear. At first, Putin was intent on capturing Kyiv and toppling the government, but that failed.

Russia appeared to respond to Ukraine’s counteroffensive with retaliatory missile strikes on civilian infrastructure Sunday night, plunging several regions, including Kharkiv, into darkness as the power went out. Pentagon officials acknowledged there had been a notable increase in Russian strikes over the weekend.

Kremlin propagandist Margarita Simonyan, the editor in chief of the government-funded TV channel RT, formerly Russia Today, cheered the attacks, adding on social media that “electricity is a privilege.”

But the mood around Ukraine remained jubilant and defiant.

On social media, people reposted Ukraine President Volodymyr Zelensky’s statement directly addressing the Russians, saying that, “cold, hunger, darkness and thirst are not as scary and deadly for us as your ‘friendship and brotherhood.’ ”

The euphoria seemed only to harden Ukraine’s position that it will not surrender an inch of territory to Russia, and is intent on reclaiming land, including Crimea, that has been occupied since 2014.

Volodymyr Fesenko, director of the Penta, Center of Applied Political Studies in Kyiv, said the military successes were “a signal to exactly those Western politicians who are wavering,” who fear that providing weapons could lead to a dangerous escalation in the conflict.

U.S. officials have said that it is up to Ukrainian officials if and when they choose to broker an end to the war with Russia. But some of Ukraine’s Western partners are concerned that the Russian setbacks, combined with Zelensky’s refusal to make concessions, could escalate the conflict and even prompt Putin to use a tactical nuclear weapon.

“The West should be very clear now that crossing those lines could bring NATO much more aggressively into the conflict,” said Jim Stavridis, a retired U.S. admiral and former supreme allied commander of NATO.

“While the odds of fully expelling the Russians from all of Ukraine are long, the job of the West should be to give them what they need to be in the strongest possible position to negotiate — something that appears months away,” Stavridis said. 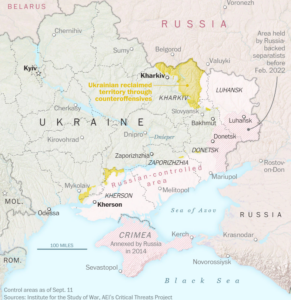 Maintaining the recently reclaimed territory will be a challenge for Ukraine. The Kharkiv region borders Russia and the city of Kharkiv, which was Ukraine’s second-largest before the war, remains in range of Russian rocket artillery even if fired from Russian territory.

On Monday, after the dizzying run of victories, at least some Ukrainian soldiers stole a few hours to rest, stock up on snacks and celebrate.

In Chuhuiv, a city east of Kharkiv, vehicles painted camouflage green and donated from around Europe came and went from the small grocery store. Fighters came out with bread and candy bars and bottles of soda, many wearing broad grins and some exchanging hugs.

“We feel fantastic,” said one. “We have momentum.”

Chuhuiv, a gateway to the stretch of liberated villages east of Kharkiv, is at the edge of Ukraine’s intact cellphone network and many of the soldiers were taking advantage to access the internet. A bearded soldier leaned back on a bench talking on his phone, wearing a look of contented fatigue.

Misha, a member of the 14th Brigade who said he couldn’t give his last name, scrolled on his phone outside of a store selling military wear. Even the soldiers were stunned, he said, by the progress of the counteroffensive.

“We’ve made it all the way to the Russian border so it’s time to breathe a bit, wait for the next orders,” Misha said.

His unit helped liberate a village that has been occupied since the very first days of the invasion. The men are still based there, giving them a chance to see some residents return to the homes for the first time in seven months, even though some areas are still laced with mines and unexploded ordnance.

By Monday night, Ukrainian forces had advanced deeper into the Donetsk and Luhansk regions.

Though Ukraine had hyped a coming counteroffensive in the south to take back the port city of Kherson, its simultaneous push around Kharkiv evidently took the Russians by surprise. Russia reinforced its positions in Kherson, and Ukraine’s gains there have been slower. The Ukrainian military has restricted media access to the region.

Western military experts said they were impressed by Ukraine’s success.

“It needs to be highlighted what a great job the Ukrainians have done controlling information — their operational security,” said retired Lt. Gen. Ben Hodges, a former commander of U.S. Army Europe. It was “really, really good” that the Ukrainians were “able to move troops and equipment to the north when the Russians looked to the south,” he added.

“For Russia, this is a culminating point,” Hodges said. “They ran out of steam back in August. They could not continue offensive operations. The Ukrainians saw this and began preparations months ago.”