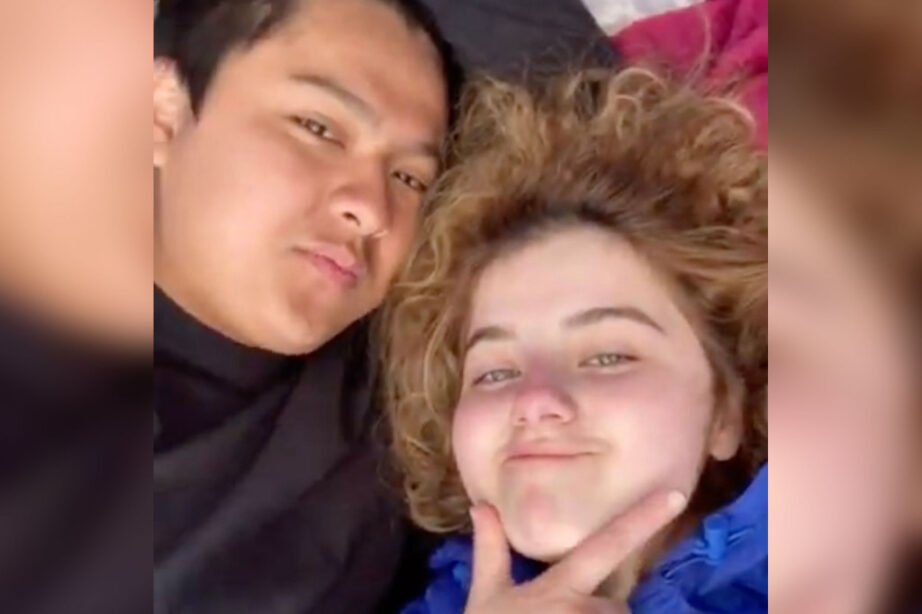 A teenage girl and her boyfriend charged with killing her father in Las Vegas laughed about “murdering somebody” and then having lots of sex in a deranged cellphone video they recorded while still on the lam.

The shocking footage, obtained by KLAS, is being used by prosecutors as evidence against Aaron Guerrero, 18, and his 16-year-old girlfriend, Sierra Halseth, the daughter of a former Nevada state senator.

“Welcome back to our YouTube channel … Day 3 after murdering somebody …,” Guerrero, with a smirk on his face, says into the camera.

“Whoa! Don’t put that on camera,” Halseth replies while giggling.

“It was worth it,” Guerrero adds before pecking his girlfriend on the forehead.

The teen girl then brags how they “had sex a lot today,” which her boyfriend mumbles was “payment for doing it.”

He then softly slapped her face and put his hand around her throat, with Halseth pretending to choke before finally looking at the camera with her eyes wide, saying casually, “So, yeah.”

Aaron Guerrero and Sierra Halseth in their YouTube video.Youtube

The apparent admission was filmed in April, six days after they allegedly killed Halseth’s father, Daniel Halseth, 45, attempting to dismember him and setting fire to his house, the report said.

They then fled in the father’s blue Nissan Altima, but were caught less than a week later in Salt Lake City while allegedly planning to flee to California.

The father was murdered after the teens were told by their parents they could no longer be together, KLAS reported, citing police.

The dark admission was reportedly made after the couple killed Sierra Halseth’s 45-year-old father and set fire to his house.Facebook

They stabbed him and then attempted to set fire to and dismember his body — using his bank cards to buy items used in the gruesome crime, police told the local station.

Prosecutors presented to the grand jury photos that included the daughter buying bleach, and her boyfriend buying a saw, lighter fluid and gloves, the report said.

They were also shown images of the blood-soaked crime scene, with knives, saws, the lighter fluid and burned material, the station said.

A blood-soaked rug was found in the trunk of his vehicle, which they used as a getaway car, KLAS said.

The smoke-filled crime scene was discovered after Daniel Halseth’s mother, Christine Halseth, couldn’t get hold of him — and grew increasingly suspicious of her granddaughter’s explanations, according to text messages obtained by KLAS.

“His phone has been acting up, but he’s okie,” the teen texted her concerned grandmother at some point, according to the texts. “It should be all fixed by tomorrow night, no worries :)” she reportedly wrote.

The next day, Christine Halseth asked her granddaughter, “Why are you doing this? … Now the police are involved,” according to KLAS.

Despite being just 16, the daughter has been charged as an adult, but cannot face the death penalty, KLAS said of Nevada state law.

Along with the murder charges, the two have been indicted on charges of conspiracy, arson, robbery and fraudulent use of a credit card.

As he is 18, Guerrero can potentially face the death penalty. His attorney, Gabriel Grasso, told the station that the case will be reviewed by the district attorney’s office next week.

“Whoa, don’t put that on camera,” Sierra Halseth is heard telling her boyfriend while giggling in the video.Facebook

Sierra’s mother, Elizabeth Halseth, was once a GOP state senator who was elected at 27 as the youngest person to the Nevada Senate in 2010, the Las Vegas Review-Journal has reported. She has since remarried and has not yet spoken publicly about the allegations against her daughter.

The dead man’s family told KLAS in a statement that he was “first and foremost a loving father, brother, and son, who was the heart of the Halseth family.”

“To have him taken from us in such a horrific, savage, senseless, and violent act of murder leaves us heartbroken, and our grief is unyielding,” the family said.

Daniel Halseth was murdered after allegedly telling the teen couple they couldn’t be together.Facebook

“The total lack of remorse on display in the video is both reprehensible and unforgivable.”

The family said it is “waiting for justice to be served with the maximum accountability allowed.”

“We loved Dan very much and we miss him every moment of the day,” the statement said.