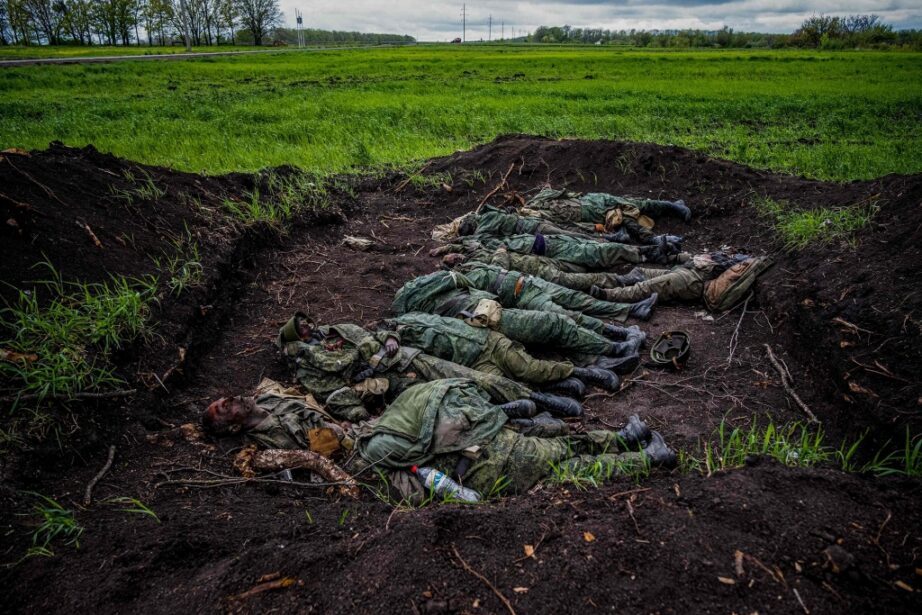 Russian troops dumped thousands of their war dead in heaps “as tall as a man” in a desperate bid to hide the true extent of their losses, according to an intercepted call released by Ukrainian authorities.

The Security Services of Ukraine on Tuesday said the call caught an invading soldier telling his wife about “makeshift dumpsites” with “so many corpses that the mountains of them reach” more than 6 feet high.

“It’s not a morgue, it’s a dump,” he told her of the site near Donetsk.

“They were just lying one on top of another. … It was a dump as tall as a man,” he said, according to a translation by the Times of London.

The dispirited soldier said he heard about the human dumping ground from the wife of a soldier who was only reported as missing, but whom she found among the dead there.

“She said there were thousands [of bodies],” he told his wife.

“They chuck them there and then it’s easier for them to say they’re missing in action,” he told her, according to the UK Times.\

The Security Services of Ukraine claims a Russian trooper admitted many fallen soldiers are being tossed into dumps.AP Photo/Felipe Dana

Ukraine’s Security Service called it proof that “parents, wives and relatives of the occupiers should think if they are ready for their loved ones to be torn to pieces by dogs or rot in the open air.

“Or, maybe, they can do everything to prevent them from going to war?” the agency said.

It follows widespread reports of crushing low morale among Russian troops amid mass deaths, with Ukraine claiming by Wednesday that 26,350 invading troops had been killed.

The bodies of 11 Russian soldiers were found near the village of Vilkhivka in Ukraine on May 9, 2022.IGOR TKACHOV/AFP via Getty Images

On Tuesday, US D​irector of National Intelligence Avril Haines told the Senate Armed Services Committee that the “Russians met with more resistance from Ukraine than they expected,” leaving President Vladimir Putin forced to change tactics and prepare “for a prolonged conflict.”

Lt. Gen. Scott Berrier, the head of the Defense Intelligence Agency, told the committee that Russia’s losses were known to include at least eight to 10 generals — notably more than the US lost throughout 20 years of wars in Iraq and Afghanistan.

He was asked by Sen. Tom Cotton (R-Ark.) if that suggested “that these generals are having to go forward to ensure their orders are executed,” unlike US generals, who can “count on” their troops.

Volunteers pick up corpses of Russian troops in the village of Vilkhivka, Ukraine, on May 9, 2022.REUTERS/Julia Kochetova

Asked if “Russians probably are not terribly motivated to be the next wave of recruits in Vladimir Putin’s war of aggression,” Berrier again conceded, “I would say not based on what we’ve seen.”