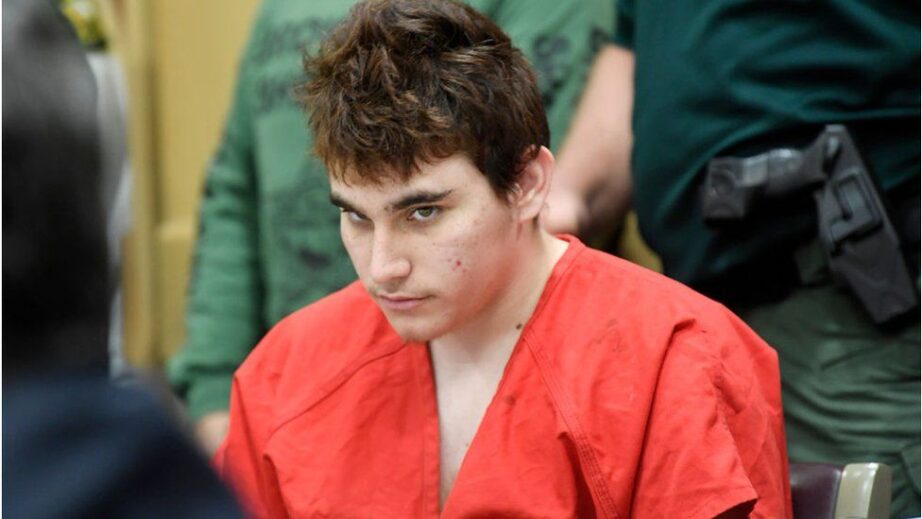 Parkland school shooter Nikolas Cruz pleaded guilty Wednesday to killing 17 people in the 2018 massacre at his former high school — before apologizing for the rampage and going on a bizarre rant about marijuana and racism.

“I am very sorry for what I did and I have to live with it every day,” Cruz, 23, told Circuit Judge Elizabeth Scherer.

“And that if I were to get a second chance, I would do everything in my power to try to help others. And I am doing this for you, and I don’t care if you do not believe me.”

Cruz, who removed his mask to speak, said he was tormented by “nightmares” following the massacre and can’t “live with” himself sometimes. He was charged with 17 counts of first-degree murder for gunning down 14 students and three staffers on Feb. 14, 2018, using an AR-15 semiautomatic rifle at Marjory Stoneman Douglas High School, where he had been expelled a year earlier.

Some of the victims were shot as many as 12 times, prosecutors said.

A penalty trial will determine if Nikolas Cruz will receive a sentence of death or life in prison without parole.CBS via Reuters

“But I try to push through because I know that’s what you guys would want me to do,” Cruz continued.

“I hate drugs and I believe this country would do better if everyone would stop smoking marijuana and doing all these drugs and causing racism and violence out on the streets.”

Cruz had previously told investigators in 2018 that he was a heavy marijuana user and had heard voices in his head telling him to “burn, kill, destroy,” NBC News reported. He had also taken large amounts of Xanax and said he tried to kill himself two months before the massacre – adding that it wasn’t his first suicide try.

Cruz then wrapped up his rambling mea culpa, saying he was trying his best to maintain his composure.

“I just want you to know that I’m really sorry and I hope you give me a chance to try to help others,” the confessed mass murderer said.

Nikolas Cruz is charged with 17 counts of murder and 17 counts of attempted first-degree murder.CBS via Reuters

“He’s doing it for our families?” Montalto told reporters after attending the hearing. “If you wanted to do something for our families, you shouldn’t have killed our loved ones.”

Tom Hoyer, whose 15-year-old son Luke was killed, said Cruz only had one person in mind with his statement.

“Self-centered,” Hoyer said. “Thinking about himself.”

Nikolas Cruz apologized to the families of his victims.CBS via Reuters

Other relatives of victims who sat in the courtroom broke down in tears or shook their heads as Cruz entered his pleas and spoke.

Cruz also pleaded guilty to 17 counts of first-degree attempted murder for wounding 17 others during the massacre at the high school outside Fort Lauderdale. He was 19 at the time.

The guilty pleas now set up a penalty trial during which jurors will determine whether he will be sentenced to death or life in prison without parole.

Scherer began the hearing by asking Cruz questions about his mental health and whether he was under the influence of drugs or had been diagnosed with any illnesses. He said he was having some anxiety, but understood Scherer’s questions.

Scherer said she accepted Cruz’s pleas in the case, as well as a guilty plea in a separate case for attacking a Broward County jail guard nine months after the massacre.

Cruz said he believes the families of the victims should make the decision whether he lives or dies. But Scherer told him state law mandates that a jury make that ruling.

The penalty phase is expected to start with jury selection on Jan. 4.

“We want him to get the death penalty,” Dworet said last week after Cruz’s attorneys indicated he would change his plea in the high-profile case. “We want him to suffer.”

Andrew Pollack, whose 18-year-old daughter Meadow was gunned down, was even more blunt as to how he thought the confessed killer should be punished following Wednesday’s hearing.

“Death by lethal injection seems too peaceful to me,” Pollack told the Associated Press. “I’d rather see a hanging in a public square.”

Jaime Guttenberg, 14, (above) was described by relatives as a ‘kind-hearted, sweet’ girl. She attended the school with her younger brother who survived and rushed home afterwards. Senior Nicholas Dworet (top) was a gifted swimmer who had his sights set on 2020 Tokyo Olympics success. His devastated college student girlfriend is among those grieving his death. Friends said he was not just a talented athlete, but a ‘good guy’ who will be missed

Martin Duque, 14, (top) was missing for hours on Wednesday and his frantic family desperately appealed for him to get in touch on social media. On Thursday, his older brother Miguel confirmed his death. Martin was a freshman. Meadow Pollack, 18, (above) was preparing for college. Her father was at the school on Wednesday and showed her photograph around in the hope that she would be found alive

Cara Loughran (above) was missing on Wednesday afternoon. Her mother Denise and her father rushed to the designated hotel where parents were told to go to be reunited with their children in the hope that she would be found alive. Her grieving neighbor confirmed her death on Thursday. Alyssa Alhadeff, 15, (top) was eulogized by her mother who said she was a talented soccer player and creative mind. ‘All she had to offer the world was love… I just sent her to school and she was shot and killed,’ she said

Luke Hoyer, 15, (above) was described as a ‘precious’ child by his grandparents who confirmed his death. They found out about the shooting on television. They said he was a ‘good kid’ who ‘never got in trouble’. Joaquin Oliver, 17, (top) was also killed. Joaquin was a Venezuelan immigrant who came to the US with his family for a ‘better future’, they said on Thursday

Gina Montalto, 15, (above) was described as a ‘light and joy’. She and Jaime, another victim, volunteered at a local project called The Friendship Initiative where they acted as buddies for children with special needs. Gina’s mother Jennifer shared pleas to find her on social media on Wednesday. Alaina Petty, 14, (top) was also killed. Her Mormon church confirmed her death, saying she was a ‘valiant’ member

Carmen Schentrup, 16, (top) was also killed in the shooting. Carmen was a gifted student who last year was named as a semifinalist in the 2018 National Merit Scholarship Program. It includes students who score above average in their SATs or National Merit Scholarship Qualifying Test. ROTC student Peter Wang, 15, (above) also died. His parents speak little English and relied on their neighbor to post social media appeals looking for him. They went to the Marriott hotel with other parents to wait for news of him on Wednesday night and have since confirmed that he was among those killed

Alex Schachter, 14, (above) was also killed.  His mother died when he was a child and he attended the school in Florida with his brother, who survived. The teenager’s father Max said he was a ‘sweetheart of a child’ who ‘just wanted to do well and please his parents’. Helena Ramsey, 17, (top) was described by relatives as a ‘reserved’ and studious girl who was due to go to college next year

Geography Scott Beigel, 35, (above) was shot dead as he tried to lock the door of his classroom again after letting a group of fleeing students in to hide. They were running away from the gunman. Aaron Feis, 37, (top) died acting as a human shield. The track coach had thrown himself on top of the kids to stop the bullets from hitting him. He was a former student and was also a security guard at the school where he had worked for eight years