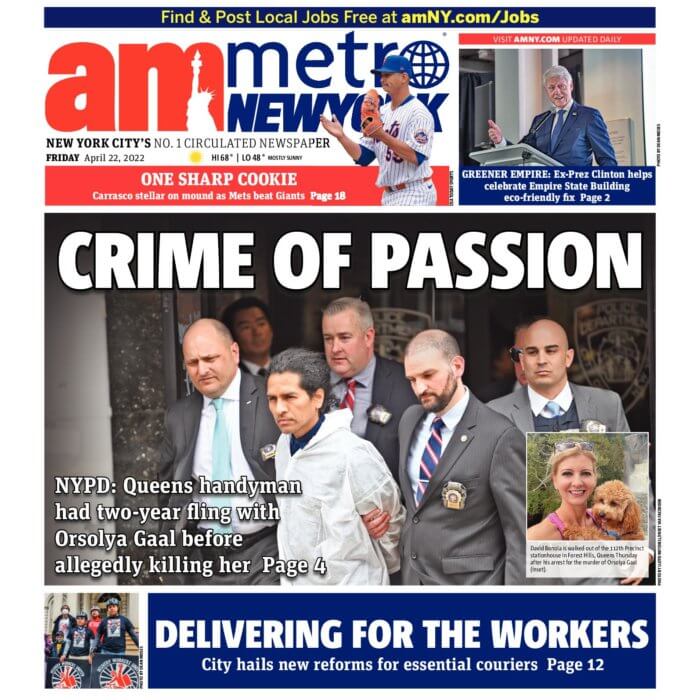 The longtime lover of a married Queens mom confessed to her gruesome killing, with a heated late-night argument in her basement ending with a brutal homicide where the helpless woman was stabbed 55 times, police said.

David Bonola is seen at Queens County Criminal court where he was charged with the brutal murder of Orsolya Gaal in her Forest Hills home.

The house of Orsolya Gaal in Forest Hills, Queens on April 16, 2022Kevin C. Downs for The New York Post

The suspect acknowledged his romance with the married mother of two teenage boys and admitted after his surrender to arguing with the victim before killing her, sources said.

Investigators quickly became focused on Bonola, who met Gaal while working as a handyman at the family’s tony Tudor home. The suspect knew an extra house key was kept hidden in an outdoor barbecue grill.

Queens mom Orsolya Gaal willingly let her ex-handyman lover into her home early Saturday morning before he allegedly knifed her to death following a heated dispute where he ignored multiple requests to leave, prosecutors alleged at the suspect’s arraignment Thursday night.

It was also revealed late Thursday that accused killer David Bonola, 44, allegedly slashed Gaal’s throat amid the unthinkable outburst that left the married mother-of-two with over 50 stab wounds, according to a press release from the Queens District Attorney.

“The defendant and victim were known to each other. The defendant went to the victim’s residence between 12am and 4am… to engage her in a verbal dispute,” Assistant District Attorney Josh Garland told the court at Bonola’s arraignment.

“Because she knew him, she let him into the house. He then engaged her in a verbal dispute and unfortunately she had to ask him to leave multiple times.”

But Bonola “refused to leave and the incident [escalated] with the unfortunate stabbing of the victim over 50 times,” Garland said, before detailing how Bonola allegedly then dragged her body to the park in her son’s hockey bag.

Bonola was charged with second-degree murder, criminal possession of a weapon and tampering with physical evidence.

Orsolya Gaal was slashed in the throat and left with over 50 stab wounds when David Bonola killed her, according to the Queens District Attorney.

He was remanded without bail at the court hearing.

The alleged killer wore his hair in a tight ponytail along with black jeans, a blue button down shirt and black sneakers with no laces. He had a Spanish interpreter and did not utter a word during the court proceeding.

Judge Anthony Battisiti ordered Bonola held behind bars citing his confessions and “destruction of evidence.” He was given medical attention and put on suicide watch.

“The accused lays out in detail what happened, how it happened and what he did following the events given rise to this case,” Battisiti said.

Orsolya Gaal’s body was found inside the duffel bag just after 8 a.m., as police found a trail of blood leading back to her Juno Street home.

Bonola allegedly twice confessed Thursday to killing Gaal, 51, and stashing her body in Forest Park after a discussion about their on-and-off again relationship became contentious, police and prosecutors said.

Investigators recovered recovered a bloody jacket belonging to Bonola and blood-stained tissues at the park, prosecutors said. Blood-soaked boots, a T-shirt and bandages were also found at the murder scene, police have said.

Bonola’s public defender, David Strachan, said Thursday night that his client would apply for bail at a later date.

Bonola was scheduled to return to court on April 26. He faces 25 years to life in prison if convicted.