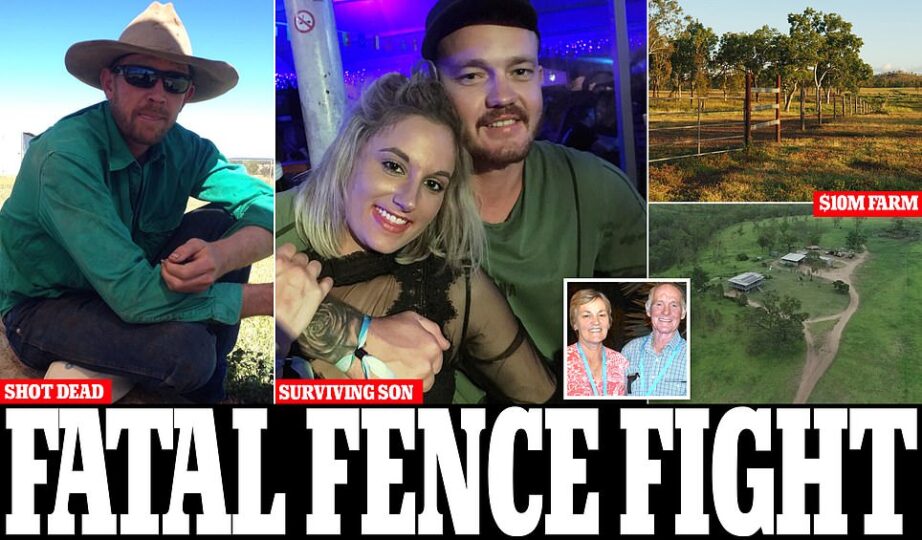 Deceased victims of the shooting have been identified as Mervyn and Maree Schwarz, and Graham Tighe

Maee and Mervyn Schwarz (pictured), along with Maree’s son Graham Tighe, died in the shooting at a cattle propery outside Bogie, near Collinsville in north Queensland. Photograph: ABC News

Police have charged a 59-year-old man with three counts of murder and one of attempted murder following Thursday’s shooting in remote north Queensland.

Police have alleged the suspect had invited members of another family to a meeting to settle a dispute before their deaths.

Ross Tighe, pictured with his partner Kaitlyn, is recovering in hospital after allegedly being shot in the stomach

Police said Mervyn Harold Schwarz, Maree Anne Schwarz and Graham John Tighe were shot dead at the front gate of a cattle property outside Bogie, near Collinsville on Thursday morning. Another family member, Ross Tighe, managed to flee the scene despite being shot in the abdomen, they said.

Ross Tighe had fled in a red ute and alerted police to the shooting of his family before being flown to Mackay base hospital earlier in a critical condition and undergoing surgery.

Police alleged there had been “a conversation” between the family and the man who has been charged the night before the shootings.

On Friday Acting Supt Tom Armitt said the suspected shooter, his son and a female member of the family were present at Thursday’s meeting. He said the trio were arrested overnight, along with two members of a power company who had been working on the property but were not believed to be involved in the dispute.

All gave statements and were released without charge, except the 59-year-old man. He is due to appear in Proserpine magistrates court on Monday.

Armitt said the suspected shooter was arrested on his property.

Further complicating the investigation was that police initially had “no idea who or where the [alleged] shooting offender was” but believed he was armed with a rifle, meaning officers were “in danger of being shot from any distance”.

“So that was slow and meticulous work and extremely brave of the officers who were involved,” he said.

A special emergency response team were called in to perform “armed clearances of the properties”.

Police said the arrested man was a long-term resident of the area, known to police, while the victims were relatively new to the area.

Property of alleged shooter neighbour above

He said there were a lot of people mustering cattle in the area at the time and called on anyone with information to come forward.