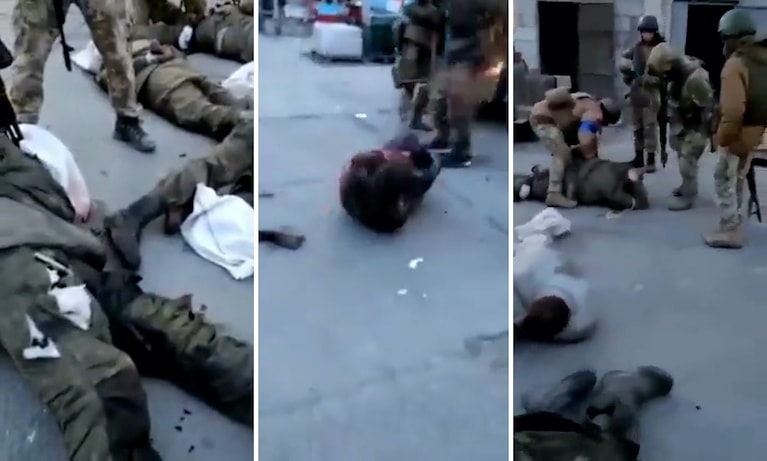 ‘Everyone in the clip speaks in Russian‘..???? The camera moves over a scene of misery. Men in Russian military uniforms lie bloody on the ground, stunned, with mangled legs. More men, their hands trussed behind their backs, step from a teal van, kneel to the ground and are shot behind the kneecap at point-blank range, screaming in pain. The muzzle of a gun, in the hand of a man who appears to be a Ukrainian soldier, emits a bright flash.

A voice accuses Russian soldiers of “slamming” Kharkiv, Ukraine’s second-largest city, where civilians have borne the brunt of relentless Russian bombardments. Translators who examined the video said Kharkiv is pronounced with a “h,” the Ukrainian way. ‘Everyone in the clip speaks in Russian‘.

The video, the content of which Ukrainian authorities say they cannot confirm but will investigate, began circulating on pro-Russian media channels and on social media Sunday. It was filmed near a dairy plant in the village of Malaya Rohan, in the Kharkiv region, according to geolocation by The Washington Post. It first appeared online on Sunday, two days after Ukrainian forces announced on Telegram that they had retaken the village.

According to the Ukrainian military,Russian soldiers were taken as prisoners in a town five miles north of Malaya Rohan on Friday.

Ukraine puts captured Russians on stage. It’s a powerful propaganda tool, but is it a violation of POW rights?

Oleksiy Arestovich, an adviser to Ukrainian President Volodymyr Zelensky, said in a YouTube video on Sunday that Ukraine would punish those responsible if an investigation found the video credible.

“We are a European army, and we do not mock our prisoners,” Arestovich said in a statement directed at Ukrainian troops in a separate Telegram post. The mistreatment of prisoners of war is forbidden under the Geneva Conventions.

Some Ukrainian officials dismissed the clip as Russian propaganda, without citing evidence. General Valerii Zaluzhnyi, the commander of Ukraine’s armed forces, said in a statement Sunday that Russia had staged videos in an attempt to discredit Ukrainian troops, who he said “strictly adhere to the norms of international humanitarian law.”

In the five weeks since Russia invaded Ukraine, the war has wrought a litany of horrors.Even among them, the stark, methodical brutality on display in the clip stands out.

A man asks a bloodied soldier where he is from. “Talk, b—-, talk,” the man says. The soldier appears to pass out before he can answer. “Next one,” the man says.

Voices mention legs being punctured and demand to know the Russian regiment’s size, which one apparent POW responds is about 50 people.

Another soldier says he is from Azerbaijan, a former Soviet state, and says he has documents to prove it.

Amid the death and rubble, Ukrainian teams hunt for evidence of possible war crimes

“Why did you come here?” he is asked.

“The order came,” he replies.

National flags and official military insignia are not clearly visible on the uniforms the troops in the video wear. But many of the captors seen handling and shooting prisoners wear blue tape around their arms, a marker used by some Ukrainian forces. The strap of a rifle carried by one captor has a small yellow section, the other main color used to signify Ukrainian allegiance.

The armbands worn by several of the wounded prisoners are white, and in one case red, both colors used by Russian troops and pro-Russian forces to distinguish themselves.

The actions depicted would be considered war crimes under the Geneva Conventions, which also prohibit prisoners of war from being used as “public curiosity.” Human rights groups have urged Ukraine to stop holding news conferences with captured Russian soldiers and posting their images online, warning such actions would violate international law.

Russia has been accused of committing numerous war crimes since it invaded Ukraine on Feb. 24. Russian forces have indiscriminately bombarded and besieged civilians, among the allegations. U.S. Secretary of State Antony Blinken said on Wednesday that he had the evidence to accuse Moscow of crimes of war. President Biden on Saturday called Russian President Vladimir Putin “a butcher.”

The United States says Russia is committing war crimes in Ukraine. Here’s what you need to know.

But the violent five-minute video quickly accumulated views Sunday, probably resonating among supporters of the invasion: Putin maintains falsely that he invaded Ukraine to stop a genocide against its Russian speakers — and the clip’s contents, real or not, align with his disinformation campaign.

Alexander Bastrykin, the head of Russia’s federal investigative committee, said in a statement that he had instructed investigators to gather evidence and identify the perpetrators “to subsequently bring them to justice.”

The clip of prisoners being shot is not the only video of Ukrainian treatment of prisoners to make the rounds.

The Armed Forces of Ukraine shared a video on Saturday of Ukrainian forces, including members of the Azov Battalion, a far-right paramilitary group with distinct insignia on their arms, retaking Vilkhivka, a village neighboring Kharkiv. Twenty-seven Russians were taken as prisoners in the town five miles north of Malaya Rohan, according to the Telegram post.

The eight-minute video features a supercut of scenes from the operation. While not all scenes could be independently verified, the video included a drone shot of a school building located in the village, according to The Post’s examination of older images of the village.

Alleged Russian soldiers are seen, many stripped to their underwear, with their hands tied behind their backs and eyes covered. They are piled into the backs of vans and trucks by Ukrainian forces.

The Azov Battalion, which has ties to extremists across Europe, has been fighting for Ukraine since 2014, absorbed into Ukraine’s National Guard. Its presence has been used by Russian President Vladimir Putin as the basis for false claims that the Ukrainian government is run by neo-Nazis.