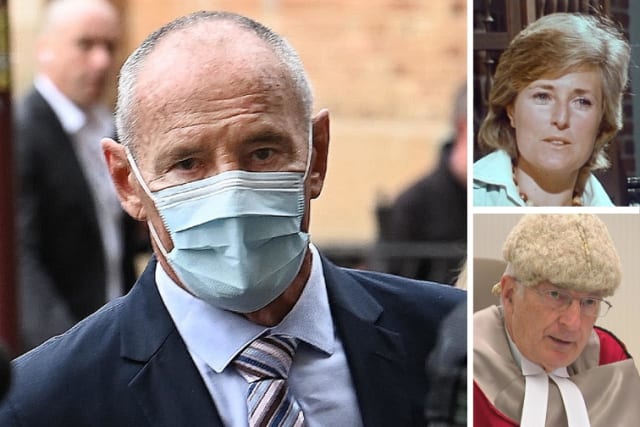 Former schoolteacher and rugby league star Chris Dawson has been found guilty of murdering his wife, Lynette, in January 1982.

Chris Dawson (centre) arrives at the Supreme Court of New South Wales Dawson is accused of murdering his wife Lynette who disappeared in 1982. (AAP Image/Dean Lewins)

In a dramatic climax to a true crime saga that has gripped the nation, NSW Supreme Court Judge Ian Harrison said he was satisfied beyond a reasonable doubt that Dawson murdered his wife.

A classified message placed by Chris Dawson in The Daily Telegraph in March 1982 in which he pleaded with his missing wife Lynette to “please ring” and come home.

The story of Lynette Dawson’s disappearance and suspected murder was thrust back into the headlines by a hugely popular podcast series Teachers Pet by The Australian journalist Hedley Thomas.

Dawson, 74, who was living on the Sunshine Coast when arrested, vehemently denied he was involved in his wife’s disappearance.

After a marathon summation of the case which took up most of the day, Justice Ian Harrison made the fateful declaration that “you did murder Lynette Dawson”.

“I find you guilty. Mr Dawson it will be necessary for you to be taken into custody,” the judge said.

The judge found Dawson murdered his wife because he was so tortured at the thought of losing his teenage lover, who babysat for the Dawson family.

“I am left in no doubt. I am satisfied beyond reasonable doubt that the only rational inference (is that) Lynette Dawson died on or about 8 January 1982 as a result of conscious or voluntary act committed by Christopher Dawson,” the judge said.

Justice Harrison said Mr Dawson and JC were in an “energetic sexual relationship” before and after Lynette’s disappearance, and that Mr Dawson was “obsessed” with the teenager and the prospect she would leave him.

He said the intense relationship between the pair and Mr Dawson’s fear of losing JC was “not by itself sufficient to establish the crime”, but said he was satisfied beyond reasonable doubt that Dawson’s intent was to leave his wife for JC.

Notes from Chris Dawson “professing his love” to JC were tendered to the court during the trial, including a Christmas card that suggested she would one day be his wife.

Earlier, the judge rejected the possibility that Lynette Dawson abandoned her husband and children to vanish without a trace, instead finding that she died around January 8, 1982.

Justice Ian Harrison rejected claims Mrs Dawson had been seen alive after January 1982 or that she had contacted her husband.

“The whole of the circumstantial evidence satisfies me that Lynette Dawson is dead, that she died on or about 8 January 1982 and that she did not voluntarily abandon her home,” the judge said on Tuesday.

Lynette Dawson had a strong attachment to her husband and daughters, was no “shrinking violet”, and had limited funds to support herself. This led the judge to completely reject the proposition she had abandoned the home with only the clothes on her back.

“The proposition is ludicrous,” the judge said.

The keenly awaited judgment was delivered seven weeks after a lengthy trial in which Dawson, now 74, was accused of murdering his wife and disposing of her body so the then-teacher could have an unfettered relationship with his former student and babysitter, JC.

In his reasons, read out to two packed courtrooms in the NSW Supreme Court, Justice Harrison found that Dawson lied about phone calls he allegedly received from his wife after her disappearance.

The judge also rejected any sightings of Lynette Dawson alive and well after January 1982 as either fabrications, unreliable, frail or vague.

“None of the alleged sightings were genuine sightings of Lynette Dawson,” he said.

Evidence by JC that Dawson had driven up to Southwest Rocks to pick her up from a holiday on January 11, 1982 was accepted by the court.

“Lyn’s gone. She’s not coming back. Come back to Sydney and help me look after the children and be with me,” Dawson said to JC over the phone before he drove up from Sydney to collect her.

JC’s evidence was mostly truthful and reliable, Justice Harrison said in rejecting allegations by Dawson that she had been corrupted by an acrimonious custody battle between them.

JC and the former Newtown Jets rugby league player married in 1984 and separated in 1990.

However, Justice Harrison dismissed claims by JC that Dawson had driven her somewhere in 1981 while she was still in high school to find a “hitman” to kill his wife.

It was improbable Dawson would have told a young impressionable JC of this alleged plan at the time, the judge said.

Dawson has always denied any involvement in his wife’s disappearance.