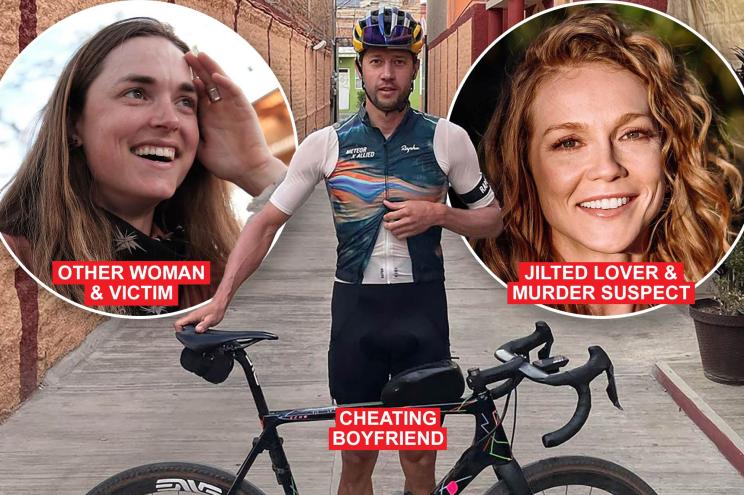 Pro cyclist Colin Strickland was dating yoga instructor Kaitlin Armstrong (right) in feature pic, who was jealous over a past fling and continued relationship he had with cyclist Moriah “Mo” Wilson. Armstrong is now wanted in connection with Wilson’s May 11 murder in Austin, Texas.NY Post photo composite

He snuck out to see a former fling — who was in town from San Francisco — early in the evening on May 11 and later texted Armstrong that he’d been off on an errand and his phone battery died.

Wilson, 25, was found shot to death with a 9mm handgun multiple times later that night by her friend. According to the arrest affidavit, police believe Armstrong, 35, killed Wilson in a jealous rage, using a gun given to her by Strickland earlier this year. Neighbors wonder if the killer may even have used a silencer.

Strickland, who has not been charged with any crime, appears to have given somewhat conflicting accounts of his relationship with Wilson, and others have contradicted his statements.

“Colin’s a douche and a player,” a woman in Austin’s tight-knit cycling community told The Post. “All he cares about now is covering his ass.”

Moriah Wilson was a rising star in the sport of gravel racing — a hybrid of road, cyclocross and mountain bike riding.Instagram/Moriah Wilson

Meanwhile, police say Armstrong is on the lam, having slipped through their fingers on a technicality after they questioned her two days after the murder. They believe she flew from Austin to New York City’s La Guardia Airport on May 14 — and then vanished from sight. The arrest warrant charging Armstrong with first-degree murder was not issued until three days later.

So far, only Armstrong’s father is on the record saying she’s innocent.

“I know her. I know how she thinks, and I know what she believes. And I know that she just would not do something like this,” Mike Armstrong, 62, told ABC’s “Good Morning America” last week.

“We can’t imagine the pain the Wilson family is going through,” he added, saying “there are a lot of unanswered questions.”

Wilson’s death has devastated her family in Vermont, where she grew up skiing and biking in an athletic family. A 2019 engineering graduate of Dartmouth College, she was a nationally-ranked skier who switched to gravel racing — a hybrid of road, cyclocross and mountain bike riding — according to her obituary. She was considered a rising star in the niche sport. She worked most recently as a demand planner for Specialized, a bike equipment company that sponsored Strickland but which has cut ties with him since the murder.

According to the affidavit, Wilson was in Austin ahead of a bicycle race in Hico, Texas, where she planned to compete the following weekend.

“Mo’s death is making lots of people realize that it’s important to live life fully as she did,” Linda Guerrette, a cyclist and professional photographer who took pictures of Wilson, told The Post. “She was a fierce competitor with utmost respect for all of her fellow competitors. Her simple philosophy of be your best self’ was all she asked of herself.”

Colin Strickland is said to have been involved with Wilson during a break-up with Armstrong — and, in some capacity, after they got back together.Flo Bikes

What has apparently pained the Wilson family even more are allegations in the affidavit that she and Strickland — who officially got together when the male cyclist said he was on a break from his romance with Armstrong — were still involved behind Armstrong’s back.

“While we will not elaborate about the ongoing investigation, we do feel it’s important to clarify that at the time of her death, those closest to her clearly understood, directly from Moriah, that she was not in a romantic relationship with anyone,” the Wilson family wrote in a statement released after her murder.

Her family created a GoFundMe where people can donate in lieu of flowers.

Wilson was from Vermont, where she grew up skiing and biking in an athletic family.

“In her short time here, Moriah inspired many, lived fully, and loved fiercely,” it reads. “In her memory, we are raising money to help fund community organizations that help youth find self-confidence, strength, and joy through biking, skiing and other activities that Moriah was passionate about.”

The alleged deadly love triangle is spelled out in unusual detail in the police affidavit:

The friend Wilson was staying with and who found her body told police Wilson had gone out to join Strickland at Austin’s famed Deep Eddy city pool. When cops went to Strickland’s address to question him, they spotted an SUV in the driveway that was nearly identical to the one seen on surveillance footage pulling up to the Maple Avenue apartment the night of the murder.

In an interview with police the day after the murder, Strickland said he had dated Wilson for a week in October 2021 while he and Armstrong were briefly broken up. But he admitted that Armstrong called Wilson, informing Wilson that she was Strickland’s girlfriend. Strickland also said he changed Wilson’s name in his phone after Armstrong had blocked the other woman’s number. He also admitted to deleting texts from Wilson so Armstrong wouldn’t see them.

(On May 20, however, Strickland issued a statement in which he maintained he and Wilson had only a “platonic and professional” relationship after their October tryst but made clear that they saw each other often “in public settings.” He did not return phone calls from The Post.

Strickland said he and Wilson went swimming and then had dinner at the nearby Pool Burger restaurant. He dropped her off a little after 8:30 p.m. then texted Armstrong with what he admitted to police was a lie. 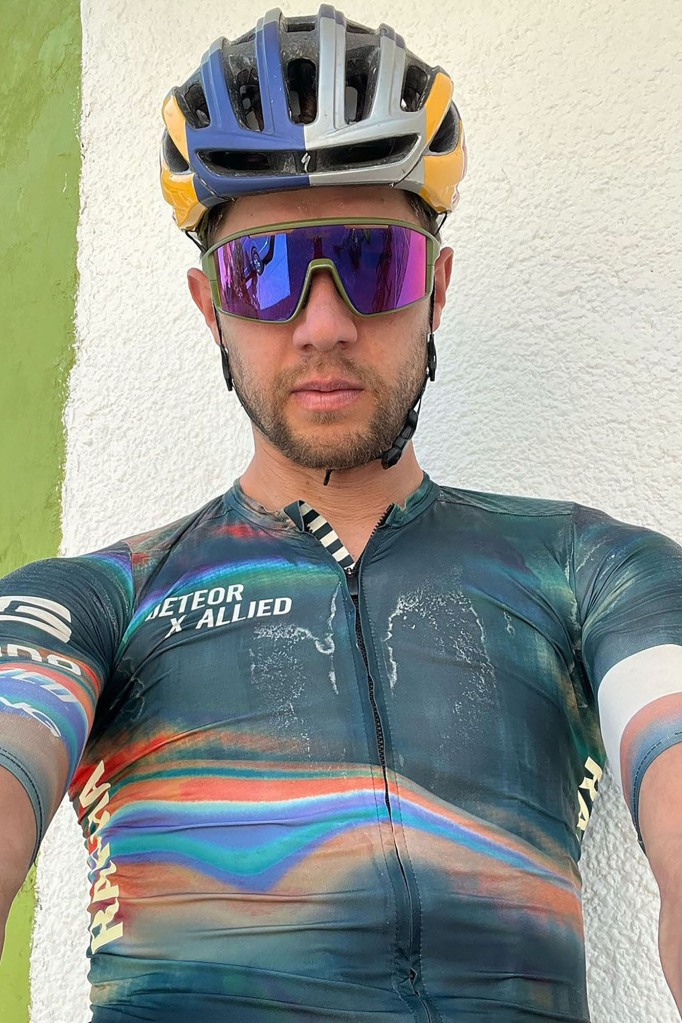 Strickland admitted to secretly talking to Wilson and changing her name in his phone so Armstrong wouldn’t know.Instagram/Colin Arturo Strickl

“Hey? Are you out?” he messaged her. “I went to drop some flowers for Alison at her son’s house up north and my phone died. Heading home unless you have another food suggestion.”

Strickland also lavished Wilson with praise during the police interview, calling her “the best female cyclist in the world” and referring to Armstrong, who was more of an amateur cyclist, as merely a “participant” at races. He said Armstrong complained that he was “grumpy” when he had to wait for her to catch up to him during bike racing training.

Strickland also said he had purchased two firearms, a Springfield Armory handgun for himself and a Sig Sauer handgun for Armstrong, sometime between December 2021 and January 2022. Police later found shell casings at the Maple Avenue apartment that could have come from the Sig Sauer gun, they said.

Wilson’s friend told police that she had an “on and off relationship” with Strickland. The friend warned her to stay away from him.Instagram/Moriah Wilson

At the same time a detective was interviewing Strickland, another detective brought Armstrong in for questioning based on an unrelated misdemeanor warrant out for her, the affidavit stated.

Armstrong had little to say when confronted about her car having been seen on video near the apartment on the day of the murder. She remained “still and guarded,” the affidavit states. She did deny angrily knowing anything about Strickland being with “this girl.” She was allowed to leave after questioning.

Austin police did not say what the misdemeanor warrant was for and did not respond to calls from The Post. In an odd twist, cops said at a May 25 press conference that, had it not been for a discrepancy between the birth date on Armstrong’s misdemeanor warrant and her actual birth date, detectives might have been able to take her into custody after questioning her.

An anonymous tipster who contradicted Strickland’s statements said he and Wilson had only a platonic and professional relationship after their initial tryst in October 2021.Instagram/Colin Arturo Strickl

To complicate matters, police spoke to a friend of Wilson’s on May 13, who said Strickland and Wilson had been “on again and off again” but had had multiple romantic liaisons. The friend said Armstrong had warned Wilson to stay away from Strickland.

There was also an anonymous tipster who contradicted Strickland’s statements that he and Wilson had only a platonic and professional relationship after their initial tryst in October 2021. This person called cops on May 14 and said she had been with Armstrong in January 2022 when Armstrong found out that Strickland was allegedly still seeing Wilson.

The caller said Armstrong “became furious and was shaking with anger” and told her she wanted to kill Wilson, the affidavit stated.

Wilson was found shot to death at a friend’s East Austin home.

After going through Wilson’s phone, police appear to back up the idea that she may have still considered herself in some sort of relationship with Strickland. According to the affidavit, Wilson sent Strickland a text in January 2022 after apparently being at an event where she saw Strickland with Armstrong.

“Hey!!” she wrote. “Sooo I would like to talk to you at some point. I had originally texted you on Friday but it appears my texts aren’t going through again. This weekend was strange for me and I just want to know what’s going on. If you just want to be friends (seems to be the case) then that’s cool but I’d like to talk about it ’cause honestly my mind has been going circles and I don’t know what to think.”

Strickland responded in a text: “Hey Mo I feel very s–tty for putting you in a position where you don’t feel comfortable. Kaitlin came along … In hindsight, this was not a good idea.”

Officials believe Armstrong flew from Austin to New York City’s La Guardia Airport on May 14 — and then vanished from sight.U.S. Marshals Service

Caitlin Cash, the friend with whom Mo Wilson was staying, was not reachable by The Post.

One of many unanswered questions about the murder involves the only thing missing from the apartment after Wilson’s murder: her expensive racing bike.

Investigators found that it had been dragged out of the apartment and hidden beneath thick bamboo 20 yards away.

In an interview not long before her death, Wilson downplayed the buzz around her rising stardom in racing as if she perhaps knew her life was not as charmed as many thought.

“Sometimes when people ask, ‘Oh, when did you know you were gonna win?’ I don’t like that question,” Wilson told Velo News shortly before she was killed. “It assumes that I feel that way … sure, maybe there are times I feel pretty confident that I’m going to win but it’s usually a fight ’til the end. You never, ever know what’s gonna happen. So I never try to feel that confident. I never like to feel like I have it ‘in the bag,’ so to speak.”