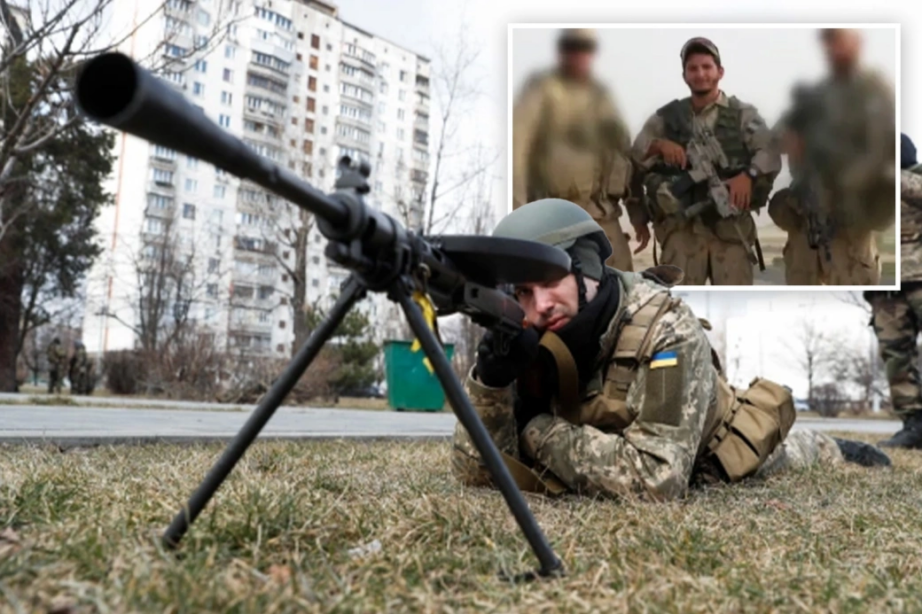 ONE of the world’s most fearsome snipers has vowed that he “won’t hesitate to squeeze the trigger” as he takes on Russian troops invading Ukraine.

Kyiv mayor Vitali Klitschko (r) and brother Wladimir are among those to have stayed to defend the cityCredit: AFP

Wail had previously travelled to Iraq on his own to fight against ISIS in 2015.

And this week he vowed that he won’t be deterred to take his shot at invading Russian troops.

“I don’t like the idea of shooting anyone. But when the time comes to squeeze the trigger I won’t hesitate,” he told The Daily Mail.

“If Putin really wants Kyiv he is going to have to pay a huge price. Nobody wants the Russians here and everyone will resist. The damage we can do to them will be crazy. They will lose so many lives it will become another Stalingrad.”

At present, Russian troops are inching closer to the capital Kyiv and are believed to be just 15 miles from the city as terrified civilians continue to flee their homes.

However, Wali said that he and his team will have the upper hand once Putin’s men pour into the streets and advance into his line of sight.

“This is a huge, built-up city, not some village. Looking out from where I am now I can see so many structures and buildings to shoot from, so many places to hide weapons and launch ambushes from, he said.

“They won’t know what has hit them.

“The Russians have already failed to take Kharkiv and Mariupol, which are smaller cities. There is no way they can hold on to Kyiv. It will be better for everyone if they decide not to attack.”

The 40-year-old was previously deployed twice to Afghanistan as a sniper with the Canadian Armed Forces between 2009 and 2011.

So far he says he has not encountered the level of violence and destruction he experienced on his previous campaigns.

“It’s a high quality rifle. It will do the job but I’ll be sad when I have to use it,” he said.

“Every time I shoot it’s a failure for everyone involved.

“A lot of these Russian soldiers are just boys themselves. I can’t help thinking that not too long ago they were babies like my son. But I’ll do what’s necessary.”

The sniper, who goes by the nickname given to him in Afghanistan of ‘Wali’, previously revealed that he was contacted by a friend on March 4 who had been organising “neutral convoys” of humanitarian aid for several months to bring food to the occupied Donbas region.

Wali told French-Canadian publication La Presse: “He told me they needed a sniper. It’s like a firefighter who hears the alarm ringing. I had to go.”

He left behind his wife and baby son, who celebrated his first birthday without him.

“I know, it’s just awful,” he said at the time. “But me, in my head, when I see the images of destruction in Ukraine, it is my son that I see, in danger and who is suffering.

“When I see a destroyed building, it is the person who owns it, who sees his pension fund go up in smoke, that I see.

“I go there for humanitarian reasons,” he added.

His wife, who asked to have her identity kept secret for security reasons, said she reluctantly allowed him to go.

“I knew that if I didn’t let him go, I would have broken him,” she said.
“It would have been like putting him in jail.”

Wali told CBC that he and three other former Canadian soldiers who made the journey with him were greeted with hugs, handshakes, flags and photos by Ukrainians after they crossed the border.

“They were so happy to have us,” he said. “It’s like we were friends right away.”

He said he crossed over from Poland, travelling against the tide of hundreds of thousands of Ukrainian refugees fleeing in the opposite direction.

Wali, who fought alongside the Kurds against ISIS in Syria several years ago, said he had travelled to Ukraine because “I want to help them. It’s as simple as that.”

He went on: “I have to help because there are people here being bombarded just because they want to be European and not Russian.”

In June 2017, one of his comrades reportedly shot dead an Islamic State terrorist from an incredible distance of 3,450m – more than two miles away.

A military source told the Toronto Globe and Mail at the time there was “hard data on this. It isn’t an opinion. It isn’t an approximation.

“There is a second location with eyes on with all the right equipment to capture exactly what the shot was.”

The unnamed sharpshooter used a McMillan Tac-50 firing a .50″ Browning Machine Gun round.

Even for an experienced combat veteran like Wali, the speed at which his life has changed in recent days is still mind blowing.

“A week ago I was still programming stuff,” he said. “Now I’m grabbing anti-tank missiles in a warehouse to kill real people… That’s my reality now.”

Before Wali’s comrade’s record, the world record for longest kill shot was held by a British soldier, Corporal of Horse Craig Harrison of the Blues and Royals.