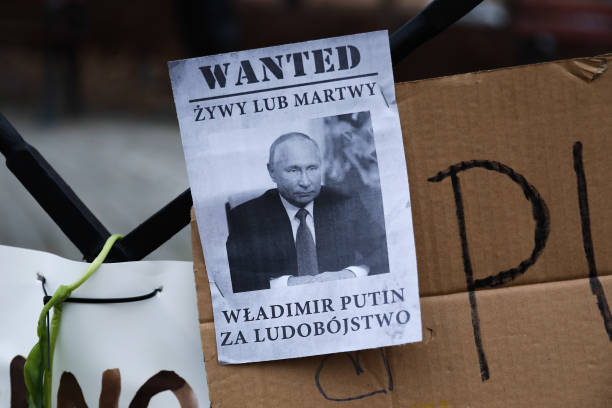 Bucha, Ukraine: When a column of Russian tanks drove into the Kyiv suburb of Bucha in the first days of the war, Tetiana Pomazanko thought they held Ukrainian soldiers and went out to her front gate to see.

But the troops opened fire on Pomazanko, 56. Bullets ripped through the wooden gate and fence around her house, killing her instantly. Her body still lay in the garden on Sunday, where her 76-year-old mother had covered her as best she could with plastic sheeting and wooden boards.

Cars lay crushed in the middle of the main road leading out of Bucha, Ukraine, on Sunday.CREDIT:IVOR PRICKETT/THE NEW YORK TIMES

“They were driving up the street,” said her mother, Antonina Pomazanko. “She thought they were ours.”

Pomazanko’s killing is just one of scores being uncovered days after Russian troops withdrew from the outlying suburbs of Ukraine’s capital, Kyiv, after weeks of fierce fighting. On Sunday, Ukrainians were still finding the dead in yards and on the roads amid mounting evidence that civilians had been killed purposely and indiscriminately.

Serhiy Kaplishny is a coroner in Bucha who worked there from February 24, the day of the invasion, until March 10, when he fled. He returned to Bucha on Saturday. He said that, so far, his team had collected more than 100 bodies during and after the fighting and the Russian occupation.

Antonina Pomazanko, 76, shows where she had buried her daughter, Tetiana, after she was killed by Russian fire in Bucha, Ukraine. Pomazanko had covered Tetiana’s body with plastic sheeting and wooden boards (seen beside her).CREDIT:IVOR PRICKETT/THE NEW YORK TIMES

Kaplishny said that before he left Bucha — as back-and-forth battles raged and then the Russian army established control — he had buried 57 bodies in a cemetery. Fifteen of those people had died of natural causes, the rest from gunshot wounds, including point-blank shots, or from shrapnel. Three of the bodies were those of Ukrainian soldiers, he said.

Before leaving town in March, he said, he had arranged for a local backhoe operator to dig a mass grave in the yard of an Orthodox church. Without electricity for refrigeration, the morgue had become intolerable, and another solution was needed. “It was a horror,” he said.

After he left, the mass grave filled up with about 40 bodies, he said, of people who died during the Russian occupation. Local coroners from his office who stayed in the town had collected some of those bodies, he said.

On a visit on Sunday to the mass grave — about 12 metres long and 2 metres wide — a pile of excavated dirt lay nearby to pile onto bodies. In one corner, two pairs of shoes and an arm protruded from a thin layer of dirt, and in another, a hand stuck out. On top of the pile, a half-dozen black body bags had been tipped into the pit.

Charred bodies of five people, lie on the ground in Bucha, on the outskirts of Kyiv, Ukraine, on Monday.CREDIT:AP

By the end of the day, back in town, he said that he had picked up about 30 more bodies in a white van. Thirteen of them were men whose hands had been tied and who had been shot at close range in the head. He said he did not know the circumstances of their deaths but believed, based on their apparently recent deaths, that they were prisoners killed before the Russian army withdrew.

“They were civilians,” Kaplishny said, showing mobile phone pictures of dead men in civilian clothes with their hands bound behind their backs and in one case in the front.

In the images, eight bodies with hands bound lay in a courtyard of a house and five in a basement, he said. “Look, that one was shot in the eye,” Kaplishny said.

A neighbour comforts Natalya, whose husband and nephew were killed by Russian forces, as she cries in her garden in Bucha.CREDIT:AP

The careless shooting of Pomazanko, at 10am on February 27, was one of the first actions of Russian troops in Bucha.

After her mother covered her daughter’s body, she said, “I buried her a bit in the night.”

“There was so much shelling; I did not know what to do,” she added.

In the yard on Sunday, the dead woman’s feet, in woollen socks and galoshes, poked out beneath the boards, beside the path where she had stood.

Svitlana Munich, a former classmate of the dead woman, stood nearby in tears. “They shot everyone they saw,” she said of the Russians. “They shot the gas pipe, too, and her mother was in the house.”

A main thoroughfare in Bucha — Vokzalnaya, or Station Street — was unpassable on Sunday, strewn with destroyed Russian tanks and armoured vehicles, downed cables and burnt debris. Scores of Russian soldiers were killed, residents said, when the column of Russian tanks came under a drone attack.

Several of the houses on one side of the street caught fire, but some of the Russian soldiers who survived the blast escaped into people’s yards, residents said. Two bodies in the garden of one house further up the street were probably those of Russian soldiers, said Kostiantyn Momotov, who lived nearby.

The men had cast off their army uniforms and boots, he said, pointing to a camouflage jacket on the ground, and put on civilian clothes, possibly to avoid capture, he said. Both men had been shot in the head.

After the drone attack on the column, it took a week before Russian reinforcements arrived on March 4 and took control of Bucha, several residents said. After that, the Russians parked their tanks at the main intersections and in people’s yards and conducted house-to-house searches, they said.

Russian troops commandeered Iryna and Roman Davidovych’s house, a large three-storey villa at one of the main intersections, and parked armoured vehicles on each corner of the yard. The Russian soldiers seized their phones and computers, they said, and took over the house, pulling mattresses from the beds and laying them on the floor of the main living room. Ousted, the Davidovychs stayed in the cellar.

“We were sitting in the cellar,” Roman Davidovych said. “Shells were flying and bombs.”

“I have a lot of Russian friends, but these men were not good,” Iryna Davidovych said. Some of the men were in their 40s and seemed experienced soldiers, she said. They sat in the upstairs rooms and fired from the windows on the streets below, she said opening the window to show.

On the intersection beside the house, a body in bright blue fleece lay hunched over the steering wheel of a crushed car. It was not clear how the person had died, but the car seemed to have been flattened by an armoured vehicle.

“They were shooting, shooting,” Iryna Davidovych said. “And they made a terrible mess and stole things.” Mostly the soldiers took socks and T-shirts, she said. But her husband showed where they had pulled two safes into the yard with their tanks and broken them open.

There were young soldiers, too, Iryna Davidovych said. One, called Vanya, was only 19 and told them he dreamed of being wounded and sent home.

“He understood they were occupiers,” she said.

Galina Levitskaya, 60, a retired teacher, said she had no negative experiences with the enlisted Russian soldiers who patrolled the town. It was her impression, she said, that they had orders to be polite and to share their meal rations, which they did. “They helped us carry bags,” she said.

Others fared far worse. Vitaly Sinadin, a 45-year-old sculptor who was hobbling down a street on Sunday afternoon, said he had been tied to a metal pole for two days in a cinder-block house used by Russian forces as a base.

“They beat me, asking, ‘Where are the Ukrainian soldiers?’ and ‘Who in town is in the Territorial Defence Force?’” — a reference to the volunteer units that sprang up in the first days of the Russian invasion. A sprawling red-and-black bruise covering his thighs and back was consistent with his account of extensive beatings.

On Sunday afternoon, on a road leading west out of Bucha, a man lay dead on his back, his green bicycle toppled beside him. Shot through the face, he bore a large hole in the back of his skull.

Further along that road — in a clearing in a pine forest on the edge of the village of Dmytrivka — police had earlier in the day pulled the body of a Russian soldier, his face and uniform burnt, from the turret of a blown-up tank. His documents showed he was 22 and from Buratyia in eastern Siberia.

By late afternoon, the destroyed tanks were dusted by a snowstorm that blew over Kyiv. In this silent, eerie scene, the soldier’s body still lay unrecovered.

This article originally appeared in The New York Times.