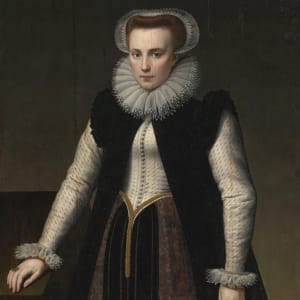 Elizabeth Báthory de Ecsed (or just Elizabeth Báthory, as she’s come to be known colloquially), a Hungarian noblewoman who lived from 1560-1614, may have been the worst serial killer in world history, possibly torturing and killing as many as several hundred girls and young women. Or, she may have “only” murdered a (comparatively) small number, the true scope of her atrocities having been obscured by legend ginned up by her family’s enemies decades or even centuries after she died, according to Britannica.

Over a 20-year period between 1590-1610, as many as 650 peasant and servant girls died at the hands of the countess and/or her co-conspirators, often dying following or during gruesome torture. Since many of her victims were poor girls whom few would miss and whose families had little legal recourse (and about whom Hungary’s legal system didn’t care a whit), and since she was a powerful aristocrat with political connections, she was able to commit her crimes with something approaching impunity, according to History. That is, until the body count started including girls of noble birth rather than just peasants.

By 1602, according to Kimberly L. Craft’s book Infamous Lady: The True Story of Countess Erzsébet Báthory, rumors of the torture and murders of peasant girls, and even some young noble girls, and the possible involvement of Báthory, had reached the ears of King Matthias II. In those days, however, justice moved slowly, and the countess was, to a degree, shielded from public scrutiny due to her position and power. It wasn’t until 1610 that the king sent a team to investigate.

Soon dozens, and then hundreds, of witnesses were accusing Báthory of heinous crimes. From lowly servant girls to high-ranking court officials, just about anyone who had the misfortune of being near the countess, and living to tell about it, was testifying that she killed, tortured, and/or mutilated dozens, if not hundreds, of victims. The high number of victims attributed to the countess — perhaps as many as 650 — came from the testimony of a servant girl, according to Tony Thorne’s book Countess Dracula: The Life and Times of Elizabeth Báthory, the Blood Countess. The servant claimed that she had overheard a court official mention having seen that figure in one of the countess’s books.

The list of atrocities allegedly committed by Báthory and her co-conspirators transcends just murder. She’s also accused of abducting victims, once the supply of readily-available servant girls had run out; of torturing them in gruesome and disgusting ways; and of defiling their corpses.

The record of tortures of which the countess was accused will make your stomach turn. According to The Straight Dope (which puts the number of victims at 610), Báthory and her associates shoved pins and needles under the fingernails or into the breasts of victims. Others were burned with hot irons. Some were purportedly placed into a device not dissimilar to the famed “Iron Maiden,” a sort of cabinet fitted with knives which would “embrace” its victims and stab them to death.

The bodies of the dead victims also allegedly suffered gruesome fates. The countess was accused of making victims eat the flesh of other victims, or even their own. Elizabeth herself allegedly took nightly baths in the blood of the victims in order to remain young. And when local clergy refused to look the other way before burying the bodies, Báthory and her team would simply hide them in grain silos or throw them to the wolves, in the most literal possible sense.

Báthory may not have done everything she was accused of

There are several reasons not to believe every last detail of every last allegation against the Hungarian countess, not the least of which is the fact that four centuries have passed between her crimes and the present day. History often muddles the narratives of what actually happened, especially when the people writing it aren’t sympathetic to the main players.

Similarly, author László Nagy claimed in his book A rossz hírű Báthoryak (“The Infamous Báthory”) that the countess had simply crossed the wrong people, due to her wealth and status, and that the criminal accusations against her were politically — and possibly religiously — motivated.

Further, author Dr. Irma Szádeczky-Kardoss claimed, in the scholarly paper The Bloody Countess?, (posted at Notes on Hungary) that one of the men who investigated the countess stood to gain professionally from trumping up charges against a disgraced noblewoman.

As Biography noted, three of Báthory’s servants testified to their mistress’ crimes, while themselves under torture, and their own supposed involvement in the acts. They were quickly put to death, while their mistress escaped the executioner’s axe — more or less.

Because she was a wealthy and powerful noblewoman, imprisoning her in a jail cell with common criminals would not do, and instead she was to be confined to her castle, a status roughly equivalent to the modern notion of house arrest. Even the conditions of her confinement are disputed. Biography claimed that the accused murderess was effectively free to move about the castle where she was confined. However, History claimed that she was confined to a single room with naught but slits in the walls to let in food and a meager amount of light.

Whatever the details might have been, Báthory spent the last four years of her life in the castle. She was found dead by a servant on the morning of August 21, 1614, at the age of 54. Her body has since been moved to an unmarked grave, and the location of her final resting place remains unknown, according to Find A Grave.