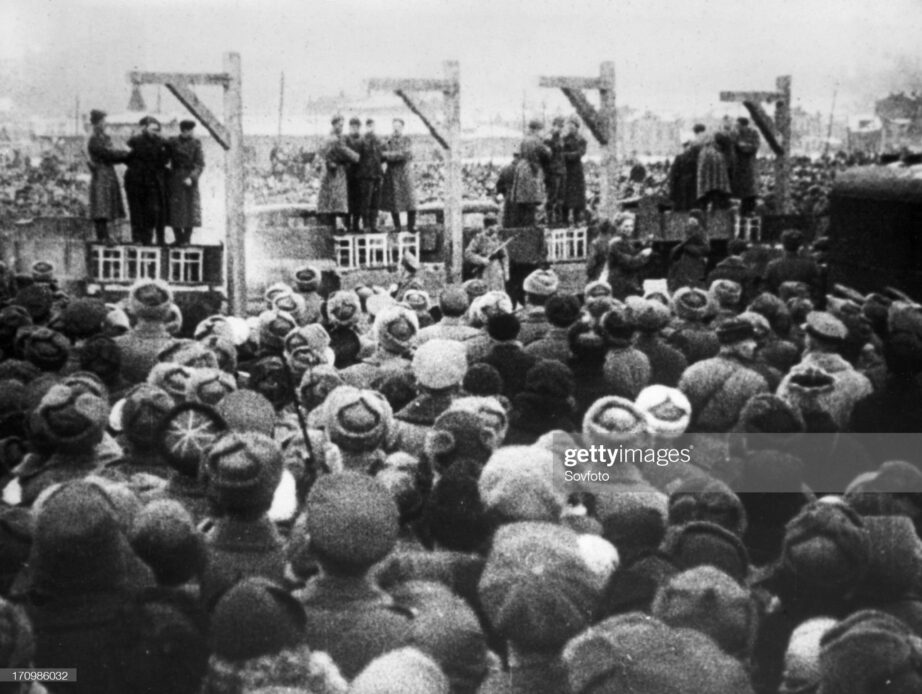 A United States Army officer straps Richard Jarczyk’s ankles together next to the stake where he will be executed by a firing squad in Germany in 1945. Jarczyk was a Pole who fought for the Nazis in World War II by sabotaging equipment and supplies and killing U.S. soldiers at night behind the lines of the U.S. 7th Army. He was discovered when he attempted to run for mayor with the Military Government in Bruckweiler and later declared that he was a spy. (Photo by Hulton-Deutsch/Hulton-Deutsch Collection/Corbis via Getty Images)

The body of Wilhelm Keitel, head of the supreme command of the German army during World War II, following his execution at Nuremberg as a war criminal, 1946. (Photo by © CORBIS/Corbis via Getty Images)

A photo taken on October 1946 shows the body of nazi criminal Arthur Seyss-Inquart executed after his trial for war crimes during the world war II at the Nuremberg International Military Tribunal (IMT) court. (Photo by – / AFP) (Photo by -/AFP via Getty Images)

A photo taken during 1946 at the Nuremberg International Military Tribunal (IMT) court shows former President of the Reichstag Hermann Goering (L) and Rudolf Hess (R), former Deputy Führer to Adolf Hitler, in the defendants’ box during the Nuremberg trial where nazi criminals were judged. Goering was tried for war crimes and crimes against humanity at the Nuremberg Trials in 1945-46 and sentenced to death. He avoided execution by committing suicide in his cell a few hours before the sentence was to be carried out. Hess served a life of sentence and died of an apparent suicide in 1987 at the age of 93. AFP PHOTO (Photo credit should read STRINGER/AFP via Getty Images)

WORK IN PROGRESS-WATCH THIS SPACE