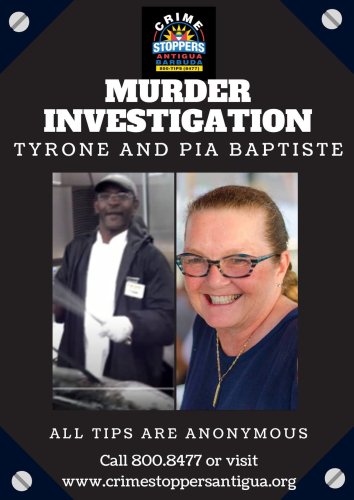 A BRIT couple have been found dead after being shot at their home in the Caribbean.

Cops in Antigua have launched a murder investigation after Tyrone Baptiste and his wife Pia, from Leicester, were killed.

Tyrone Baptiste and his wife Pia were found dead at their home in AntiguaCredit: BPM Media

Pia has been hailed as an ‘inspiration’ by the company she worked forCredit: BPM Media

The pair – who ran a tour guide company called Tropical Adventures Antigua in the Caribbean – were found with gunshot wounds on Wednesday.

Tyrone is understood to have grown up in Leicester before moving to the island with his Dutch-born wife Pia.

According to local media, a robbery is the suspected motive behind the alleged murders.

Pia’s colleagues discovered the couple dead at their home after going to check on her when she didn’t show up for work, Real News Antigua reports.

According to the outlet, neighbours heard what they believed to be gunshots in the early hours.

Tropical Adventures Antigua shared a tribute to Pia on social media, hailing her as an “inspiration”.

It read: “We are saddened to announce the passing of Mrs Pia Baptiste, the General Manager of Tropical Adventures.

“Pia has been associated with Tropical Adventures for nearly 30 years and was the rock and foundation that our company was built upon.

“Our condolences and deepest sympathies go out to her children and her entire family in Antigua and abroad. May Pia and her husband Tyrone rest in peace. Amen.”

It comes after a Brit tourist was found dead on a beach in Crete after his lifeless body was left undiscovered on a sunbed for hours.

The 54-year-old man was found in the popular resort town of Stalida on the northern coast of the Greek island, it is reported.

Meanwhile, police are investigating the mysterious death of a Brit jogger who was found floating face down in a shallow canal in Thailand.

Richard Wayne Moorcroft, 63, was seen fully clothed in the shallow ditch in Pattaya on Sunday morning shortly after 7am local time.