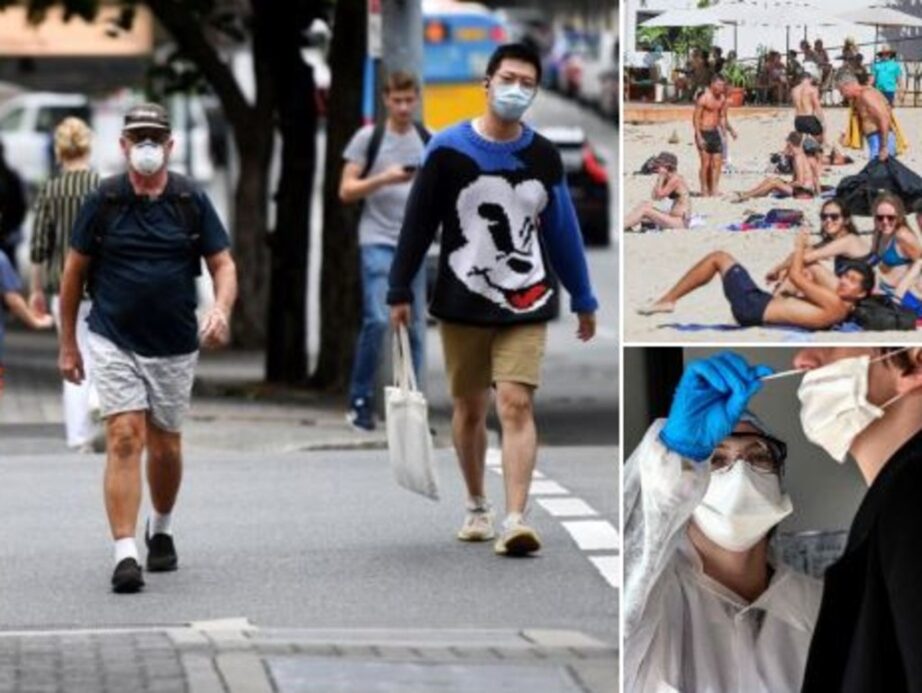 y Jason O’Toole, who has worked as a senior feature writer for the Irish Daily Mail, a columnist with the Irish Sunday Mirror and senior editor of Hot Press magazine. He is also the author of several best-selling books. The coronavirus pandemic has officially recorded its first bona fide serial killer with the arrest of a Barcelona football fan who went on a sickening random killing spree during the lockdown in the heart of Catalonia.

Even at a quick first glance, the illegal Brazilian immigrant – dressed in a Barcelona FC cap and black leather mittens – has the eerie demeanour of a psychopath in new footage that has emerged.

In a twisted irony, Thiago Lages can be seen here participating, albeit half-heartedly, in the nightly ritual of applauding healthcare workers risking their lives on the frontline in Spain. But there was certainly nothing half-hearted about the coldblooded killing spree he went on during the Covid-19 pandemic.

FILE PHOTO: An empty park in front of Sagrada Familia basilica is seen during the coronavirus outbreak in Barcelona, Spain. ©  Reuters / Nacho Doce

The 35-year-old injected terror into Barcelona’s homeless with his sickening rampage – in the same way that Jack the Ripper instilled fear into London’s prostitutes. He’s so far been charged with three murders, which technically puts him in the serial killer category. While he’s also the prime suspect in two more unsolved homicides in Barcelona and local police are now liaising with officials in Brazil and neighboring EU countries to see if his modus operandi raises any red flags elsewhere.

His killing methods should certainly set off alarm bells, because it includes bludgeoning his victims’ skulls in with an iron bar or hammer, or slicing them open with a sharp knife. He stuck out like a sore thumb too – apart from the aforementioned Barcelona FC football cap and fingerless leather gloves, he oddly also wore a Palestinian scarf and an orange reflective vest (as you do). There was also a distinctive tattoo of a cloud on his arm to help give him away. And if all that wasn’t enough, Thiago wore sunglasses when roaming downtown in the Eixample district in the dead of the night, seeking out his next victim. Talk about looking conspicuous!

The killing spree started on March 19 – with one victim discovered only 200 hundred meters away from Gaudi’s famous La Sagrada Familia basilica – and the jig was finally up when Thiago pounced on his last victim on April 27 and a nearby eyewitness called the police. “I was walking down the street when I came across an individual who was truly scary. I ran up to the house, looked out the window and saw how he tried to kill a homeless man by hitting him with a kind of stick. The victim (who died) did not stop bleeding,” said the eyewitness.

The Catalonian police force Mossos d’Esquadra have been patting themselves on the back for solving the bizarre case, with the local media making a big song and dance over it too, which would be understandable under normal circumstances. But we do not live in normal times. And all these murders occurred when Spain was in one of the strictest lockdowns in the entire world – with even exercise forbidden. So it really begs the question: how did they allow a serial killer – one they had a fitted description of, and even grainy video footage of – to remain on the loose as he randomly picked off homeless victims out in the open for over a month?

A Spanish police source last night said he would even go as far as to suggest that the “third, fourth and fifth deaths” are as a result of the “incompetence” of Mossos d’Esquadra. He told me: “I think it was bad work by Mossos, who don’t walk the streets but just respond when crimes are committed. You could say it was good investigative work in the very end when he was finally arrested, but it was certainly too late for the third, fourth and fifth victim – there was too much precious time wasted. For example, they wasted time when they first arrested the wrong homeless man. The local police malfunctioned in their preventive duties. There were too many dead with similar parameters, and no effective answer on patrol duties.”

There’s no need to use the caveat of “alleged killer” as is the usual legal prerequisite for reporting on true crime when it comes to Thiago. He might be denying any involvement in these heinous murders but the trail should be nothing more than a formality, considering the police raid on his caravan discovered weapons and blood on his gloves, which brings a whole new meaning to being caught red-handed.

Little is known about the Brazilian, who first came to the attention of local police when he was discovered living illegally in Spain back in January, having entered the country via Portugal. There was an “expulsion file pending,” to send him back to Brazil, but local police – as one popular rightwing newspaper Le Razon dramatically and accurately reported – “didn’t know he was a time bomb” waiting to explode.

The warning signs were already there from his early days in Barcelona when he was squatting in an abandoned house with a large group of vagrants and soon found himself being “expelled” by them because they became fearful of his erratic behaviour and violent outbursts. He then moved into the abandoned caravan where he was finally arrested, apparently surrounded by enough evidence to put him away for life. It was from here that he plotted the gruesome murders, sneaking out in the middle of the night while armed to the teeth. One off duty cop, who ended up following him back to the caravan, had witnessed him on the Metro acting erratically and then more alarm bells began to ring when he noticed an iron bar up his left sleeve and a screwdriver stuck up his right one.

But what about the motive itself? I’ve actually met several cold-blooded killers, including an infamous hitman that I interviewed in Wormwood Scrubs prison in London, when working on my book Crime Ink – but all those psychopaths appear very tame in comparison to this truly evil character. I may have a BA in Psychology but you certainly don’t need one to put two and two together here. It seems he specifically targeted homeless people as part of some twisted retaliation for being kicked out of the squat. It’s a line of enquiry the police are now following. “It’s an unconfirmed hypothesis,” a cop source said.

The cynic in me wonders how long it will take before Netflix airs a documentary about the life and crimes of this sick Barcelona fan, who applauded frontline health workers out there saving lives and then, in the next breath, sneaked outside to kill. It’s the type of harrowing story you just couldn’t make up.