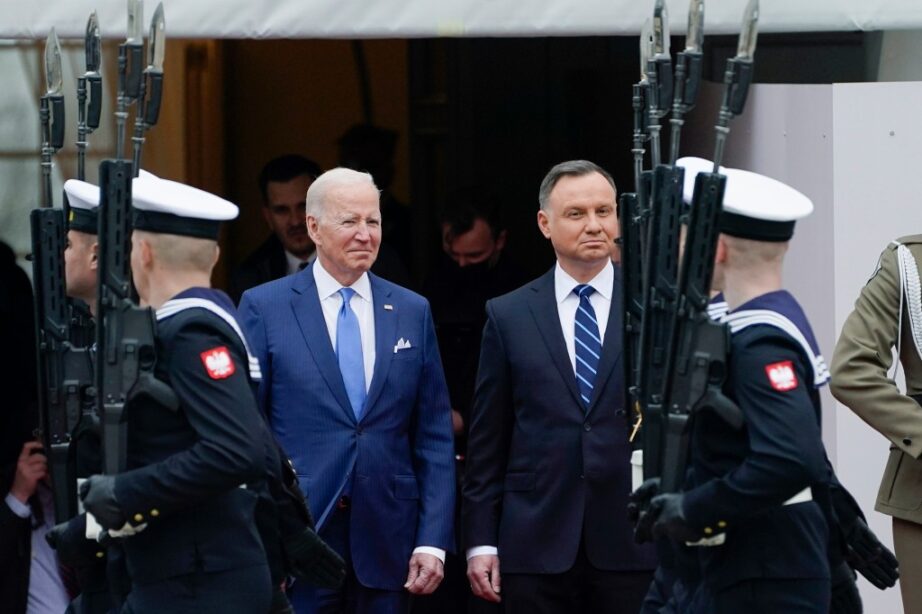 President Biden demanded the ouster of Vladimir Putin on Saturday in a fiery speech in Warsaw as the Russian invasion of Ukraine entered its second month – but the White House quickly scrambled to say the Leader of the Free World didn’t mean what he said.

“For God’s sake, this man cannot remain in power,” Biden thundered in his most forceful attack yet on the Russian leader – hours after he referred to Putin as a “butcher” for his attack on Ukraine.

“A dictator bent on rebuilding an empire will never erase a people’s love of liberty,” Biden said. “Free people refuse to live in a world of hopelessness and darkness.”

“The president’s point was that Putin cannot be allowed to exercise power over his neighbors or the region,” the official said as Biden’s motorcade made its way to Warsaw Chopin Airport for his flight back to Washington. “He was not discussing Putin’s power in Russia, or regime change.”

President Biden delivers his address during an event at the Royal Castle in Warsaw, Poland on March 26, 2022.REUTERS

It was the second day in a row that the White House was forced to clarify a startling Biden comment.

On Friday, the White House said American troops will not be deployed to Ukraine, despite a Biden aside that suggested otherwise.

“You’re going to see when you’re there – some of you have been there – you’re going to see women, young people, standing in the middle, in front of a damn tank, saying, ‘I’m not leaving,’” Biden said as he met with US paratroopers stationed in Poland.

“This is not who you are,” he told them, equating the brutal Russian Army attacks on Ukrainian civilians to the privations that Russians themselves suffered during World War II. “These are not the actions of a great nation.”

And he expressly warned Putin against making any move against members of the NATO alliance.

President Biden delivered a speech at the Royal Castle in Warsaw, Poland, on March 26, 2022.EPA/RADEK PIETRUSZKA

“Don’t even think about coming on one single inch of NATO territory,” he said. “We will defend each and every inch.”

Biden opened the 27-minute speech with a message about the importance of faith.

“Be not afraid,” Biden said, quoting Pope John Paul II when the first Polish pontiff was elected to the papacy in 1978.

But he soon segued into harsher rhetoric, saying that the world’s democracies must forcefully defeat autocratic regimes like Putin’s.

“We must commit now to being in this fight for the long haul, for the years and decades to come,” Biden said. “There will be costs, but it’s a price we have to pay.”

The blistering rhetoric did not impress one member of Ukraine’s parliament.

“No promises, no weapons. Lots of condemnation,”sniffed Kira Rudik, leader of Ukraine’s Voice political party,on Twitter. “What is our hope – that Putin will die of laughing?”

And it sparked fevered speculation on cable news channels.

“In terms of potential regime change, how does [Putin] get overthrown?” asked host Eric Shawn. “Does he get assassinated? Does he got pushed out? Does he get under house arrest?”

Biden’s high-stakes speech came on the heels of emergency summit meetings in Brussels with NATO allies and the European Commission, where he announced a plan to punish Moscow by cutting Europe’s use of Russian energy — an idea that has received pushback from Germany and others.

The president spoke just hours after he met with emotional Ukrainian refugees sheltering in a Warsaw sports stadium, calling them “brave, brave, brave” during a 30-minute visit.

“He’s a butcher,” Biden told a reporter who asked what he thought of Putin after speaking with just a few of the 3.7 million Ukrainian women and children who have fled the Russian invasion.

Earlier Saturday, the president conferred with Ukrainian Foreign Minister Dmytro Kuleba, who had traveled secretly to Warsaw to meet with Biden in person.

Soon after, US Secretary of State Antony Blinken confirmed an additional $100 million in civilian security assistance – including medical supplies and armored vehicles — to Ukraine.

Biden also held a tete-a-tete with Polish President Andrzej Duda, where he emphasized that NATO must remain united in its response to the Russian invasion.

“Vladimir Putin was counting on being able to divide NATO, but he hasn’t been able to do it,” Biden told Duda across a long conference table packed with officials of both governments

“That’s why it’s so important that Poland and the United States keep in lockstep,” he added.

Duda has proposed a plan to send Polish fighter jets to Ukraine in exchange for American planes — an idea that Biden has rejected.

A Kremlin spokesman said that Biden’s Warsaw remarks “narrow the window of opportunity” to repair relations between Russia and the US.