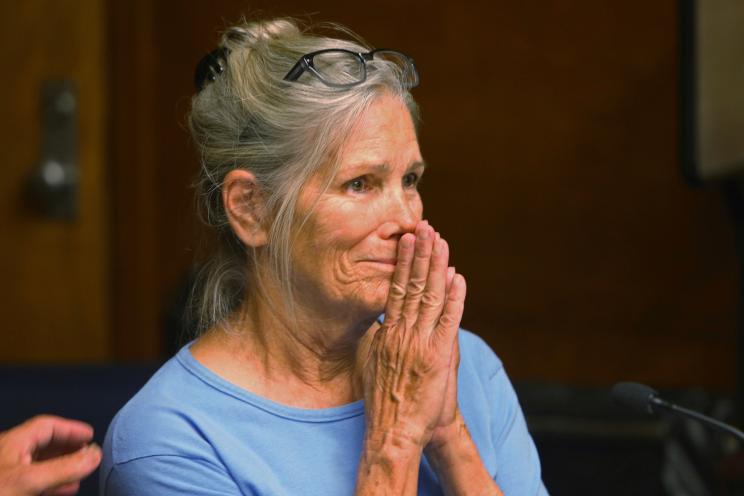 In this Sept. 6, 2017 photo Leslie Van Houten with her hands to her face reacts after hearing she is eligible for parole during a hearing at the California Institution for Women in Corona, California. Gov. Gavin Newsom would later reject the Manson follower getting parole.

California Gov. Gavin Newsom on Tuesday blocked parole for Charles Manson follower Leslie Van Houten, reversing a panel’s recommendation that she be freed after spending a half-century in prison.

Van Houten, 72, “currently poses an unreasonable danger to society if released from prison at this time,” Newsom said in his parole review. It was the fifth time that a California governor has rejected her release.

Her attorney, Rich Pfeiffer, disputed that view and said the decision will be appealed in court. He accused Newsom of rejecting parole because he is worried about “his political future” and noted that Van Houten has a spotless prison disciplinary record.

“We’re not fighting (over) Leslie being a good person. She’s proven that through her actions for half a century,” he said.

Van Houten is serving a life sentence for helping Manson and others kill Los Angeles grocer Leno LaBianca and his wife, Rosemary, in August 1969. Van Houten was 19 when she and other cult members fatally stabbed the LaBiancas and smeared the couple’s blood on the walls.

The day before, other Manson followers, not including Van Houten, killed pregnant actress Sharon Tate and four others.

In his rejection letter, Newsom noted that Van Housen had undergone therapy, earned educational degrees and taken self-help classes in prison and had shown “increased maturity and rehabilitation.”

But Van Houten also has “gaps in insight” that continue to make her a danger to society, Newsom said.

Van Houten has had 21 parole hearings since 1982. Most parole boards denied her bid for freedom. But five panels have recommended her release since 2016, saying she had expressed remorse and was no longer a threat to public safety.

He previously reversed parole recommendations in 2019 and 2020. In February, the California Supreme Court refused to hear Van Houten’s appeal of the 2020 rejection.

Manson died in 2017 of natural causes at a California hospital while serving a life sentence.