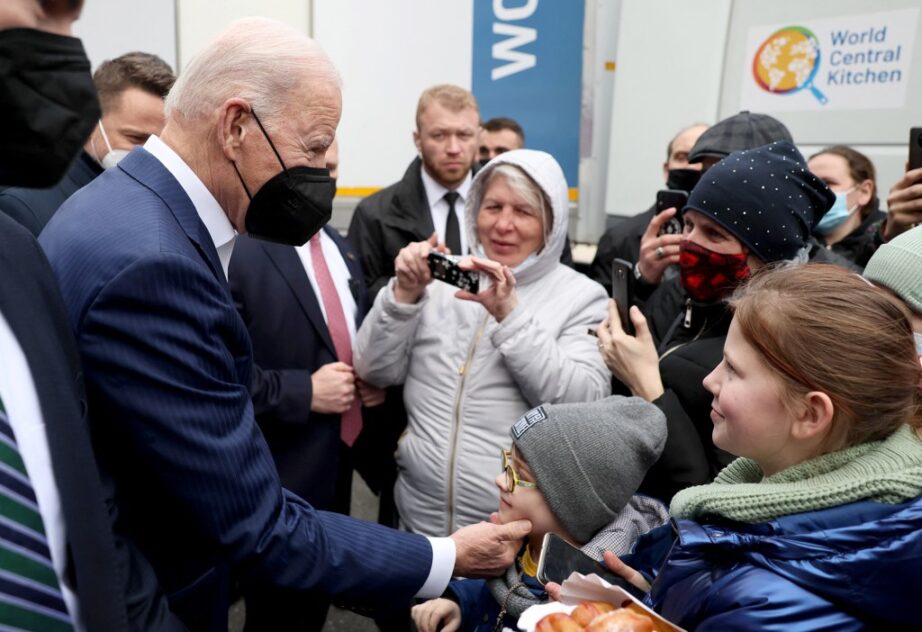 Vladimir Putin is “a butcher,” President Biden said Saturday, after he made an emotional trip to visit Ukrainian refugees at Warsaw’s PGE Narodowy Stadium.

“He’s a butcher,” Biden told a reporter who asked what he thought of Putin after speaking with just a few of the 3.7 million Ukrainians who have fled the Russian invasion.

The president wore a black face mask and a dark blue baseball cap bearing the logo of the Beau Biden Foundation — but frequently lowered the face covering as he talked.

“I love ya, I love ya,” he told a Polish woman who was volunteering with World Central Kitchen, a charity group organized by celebrity chef José Andrés to feed the thousands of evacuees taking temporary shelter in the stadium.

“Your father or your mother, who had the eyes?” he asked the woman as he pulled her close for a hug.

Later, Biden spoke with members of a family from Mariupol, the port city that has been under relentless attack by Russian forces.

He hoisted a young girl in his arms and gave her a quick smooch — “I don’t speak Ukrainian, but tell her I want to take her home,” he told a translator with a laugh — and talked to a tearful woman who said she had lost track of her husband and son as they fought to defend their city with the Ukrainian forces.

“My son was at war for a year,” Biden said in commiseration. “I know every moment you say a silent prayer, please God.”

Speaking through a translator, the woman told Biden of her fury at Russian President Vladimir Putin for launching the invasion.

“Ukrainian mothers are ready to strangle him with our bare hands,” she said.

President Biden speaks with a woman during his visit to Ukrainian refugees at the PGE National Stadium, in Warsaw, Poland on March 26, 2022.REUTERS/Evelyn Hockstein

The mayor of Warsaw, Rafał Trzaskowski, accompanied Biden during the tour.

Biden’s visit came two days after the White House announced plans to welcome up to 100,000 Ukrainians to the United States — and to send an additional $1 billion of humanitarian aid to Poland and other European nations that are struggling to manage the largest refugee crisis since World War II.

At least 2 million people, mostly women, children, and the elderly, have sought shelter in Poland as Russian forces continue to shell their home towns and cities.

Biden is on a three-day diplomatic mission to Europe that has included stops allowing him to “see firsthand the humanitarian crisis,” he said Friday.

“Quite frankly, part of my disappointment is that I can’t see it firsthand like I have in other places,” Biden said during a briefing in Rzeszow, in southeastern Poland.

“They will not let me, understandably, I guess, cross the border and take a look at what’s going on in Ukraine,” the commander-in-chief said.