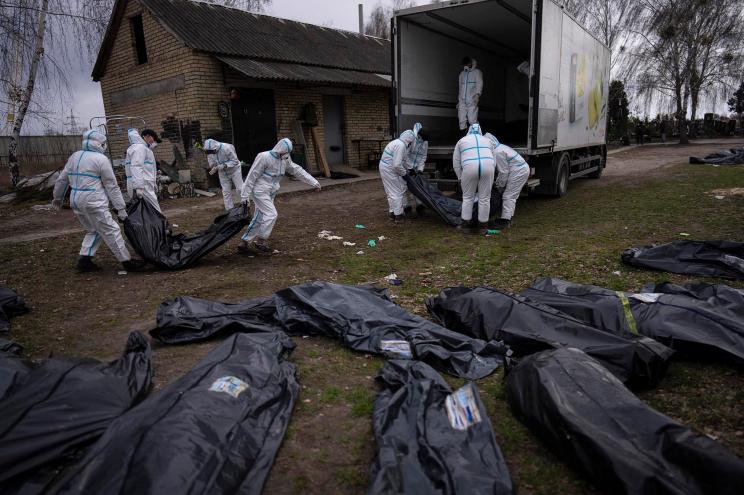 Volunteers load bodies of civilians killed in Bucha onto a truck to be taken to a morgue for investigation, on the outskirts of Kyiv, Ukraine on April 12, 2022.AP

The vast majority of the victims in the area surrounding the capital were “simply executed” by gunfire, police said. The grim body count continued to mount as corpses were uncovered under rubble and in mass graves.

Andriy Nebytov, the head of the capital’s regional police force, estimated that 95 percent of bodies left stranded in the region had been shot, and citizens who had expressed strong pro-Ukrainian views had been hunted down and murdered.

“The occupiers think this will make it easier for them to control this territory. But they are very wrong. They are fooling themselves,” Zelensky said. “Russia’s problem is that it is not accepted — and never will be accepted — by the entire Ukrainian people. Russia has lost Ukraine forever.”

News of the jarring death toll coincided with another somber revelation as Zelensky told CNN on Friday that between 2,500 to 3,000 Ukrainian troops have been killed in the invasion and about 10,000 had been injured.

Officials gave updates on the atrocities as Russia’s Defense Ministry pledged to increase air raids on the capital in retaliation for the destruction of its premier warship, which was sunk by Ukrainian missiles Thursday.

The loss of the 12,500-ton Black Sea flagship is the latest embarrassment to befall the supposed superpower’s armed forces during its unprovoked invasion. US intelligence officials doubted that the ship was carrying nuclear warheads at the time of its sinking, CNN reported.

Local residents ride bicycles as the body of a civilian killed during Ukraine-Russia conflict lies in street near the Illich Steel and Iron Works in the southern port city of Mariupol, Ukraine on April 15, 2022.Reuters

Russia also accused Ukraine of killing seven people and damaging 100 residential buildings with attacks on its Bryansk region, just across the nation’s shared border, as it geared up for renewed attacks on disputed territories in the east.

The number and scale of missile strikes against targets in Kyiv will increase in response to the Kiev nationalist regime committing any terrorist attacks or sabotage on Russian territory,” Russian Defense Ministry spokesman Igor Konashenkov told state-run news agency TASS.

Ukrainian defenders improbably held out against Russian advances on the besieged Donbas port of Mariupol, while a shelling of a Kharkiv neighborhood killed seven people — including an infant — and injured 34 others, local leaders said.

Bucha still appeared to have suffered the highest number of atrocities, with 350 people found bound and shot.

US lawmakers toured the Bucha-area this week and reported “indisputable evidence of Putin’s war crimes.”